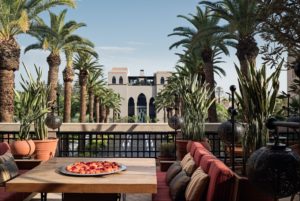 When the sun shines, as it does 90% of the time in Marrakech, the beautiful Four Seasons Hotel Marrakech is even MORE superb than just mere ‘luxury’. But of course any Four Seasons hotel can easy overcome a downpour, and here the plastic zip-up sides on the fleet of buggies went into action immediately. The gal was thrilled to be back as last visit, four years ago, the greenery on the sprawling 16-ha complex was still noticeably immature.  Now the immaculate grounds provide a sequence of different trees and foliage as you move along interconnecting lanes between the various blocks. Now owned entirely by Prince Al-Waleed’s Kingdom Holding, the 139-room resort was developed by Nabile Slitine, who is now doing an adjacent public road M Avenue, which will have Four Seasons Residences, for sale, and highest-end retail, and another hotel, a C7, co-owned by Cristiano Ronaldo. 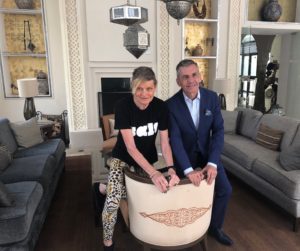 Blaise Montandon, GM of the Four Seasons, is looking forward to the completion of M Avenue: its retail will be good for his hotel guests, and those living in the Residences will undoubtedly use the hotel’s facilities. I can certainly see them coming to eat in Quattro, a clever Italian-themed all-day restaurant that manages to give a completely different ambience at breakfast from other meals. Quattro has been brilliantly conceptualised by designer Lotfi Sidirahal, from Atelier PoD Architecture(he who did Anantara Al Jabal al Akhdar, high above Muscat). You look right into the main working kitchen.  At breakfast, the inner wall is covered by chain-mail drapes and you have no idea there is a kitchen behind; instead, an adjacent room, whose doors were closed last night, is opened up to reveal the buffet. 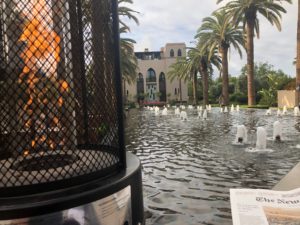 As it had stopped raining, I actually breakfasted outside, on Quattro’s terrace, revelling in the clean air, good coffee and my copy of The New York Times. (Last night, my Italian dinner had included 24-hour cooked suckling pig belly, with a splendid Prunotto Barbera d’Albera 2017. Now, being Four Seasons, what can one expect from this luxury hotel that you do not find elsewhere in Marrakech?  Room supplies include Atelier Cologne toiletries, Pomelo Paradis essence. As well as towelling robes there are Berber capes, with hoods. Unusually exciting excursions are suggested, say three days of immersion, one for desert visiting, one for touring art collections, and one for a bespoke photographic safari in the old town. Blaise Montandon also recommends visiting the private house of the late Yves St-Laurent. Interestingly, Thais are beginning to discover the fascination of Marrakech, adding to an international complement that is headed jointly by UK and USA, with France close behind. NOW TAKE A TOUR OF VILLA 60, AND THEN WALK ONE OF THE RESORT’S ‘MAJOR HIGHWAYS’