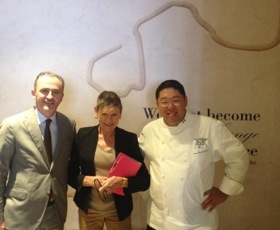 Diego Stembert and Edgar Kano in front of Gandhi’s words

Ever seen an inside-out luxury hotel? Typically, open-square blocks have rooms facing both in and out of the square, or perhaps only out. Four Seasons Mexico City, an eight-floor rectangle, was built with all rooms facing in. It is celebrating its 20th birthday this December with a facelift. Much of the lobby is behind a temporary wall painted to look like peeling paper. A beautifully written homily says ‘We must become the change we want to be, Gandhi‘. An Italian restaurant, Becco, is going to appear when this wall is taken down. 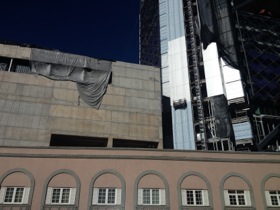 The hotel has soaring high-rise construction close by..

The hotel has been an oasis of calm since it opened (all those inner-facing rooms, with windows that open, make the experience much quieter than if they were facing out over the busy roads around). It will be even more of an oasis once soaring skyscrapers rushing up around are finished – my room 734, looked out across to what will be the headquarters of BBVA bank. As from all the bedrooms, I looked down into the inner square’s garden, exactly manicured with box-hedge parterres, modern versions of larger, historic parterres that I saw at Cliveden, only five days ago. 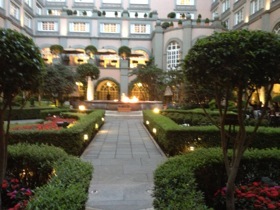 .. looking along the gorgeous inner-courtyard gardens

These gardens have birdcages, and dark bronze sculptures, and lots of open seating. Spill out here from the bar, or from Reforma 500 restaurant, named for the hotel’s address. Chef Edgar Kano heard he had an olive oil fanatic at table and he brought out a first-pressing Dia Cosecha 2012 Castillo Canena by Alejandro Sanz, as well as a local, Aceite de Oliva Misión. He was here at the hotel’s opening. Twenty years ago, he recalls, it was boeuf bourguignon or escargots, and diners had time for leisurely meals with four courses. Now it is sustainable and organic products, though you splurge on the Mayan chocolate cake that won the Coupe du Monde de la Patisserie 2009. 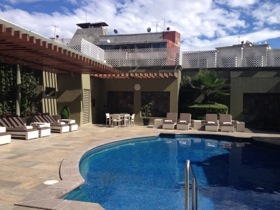 I ate in a Diego ‘sandwich’, with one Diego (Stembert, and media genius Diego Arvizu) sitting either side of me. We were outside, but because of the building’s height could hear nothing of Reforma, the avenue outside. The hotel’s pool, by the way, is another oasis – the gym looks out over it.   Jose opened the gym specially early for me – oh there are so many signs of what makes a GOOD luxury hotel, but service is honestly top of the list. Now, having seen a show-room of the new design, I long to come back, to find not the current sand and orange coloured décor but a champagne and pale steel grey and deep maroon setting, with the three sockets each side of the bed that are now apparently a Four Seasons standard.