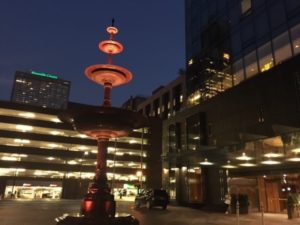 There are many Four Seasons hotels where the flowers are simply beautiful, and when they extend into the room, as here in the luxury Four Seasons Hotel Toronto, the memory is even more vivid, says the gal. The hotel was designed by Yabu Pushelberg, which is another reason for loving this place – the YP pair, who live partly in Toronto, are not here right now as they are in Rio de Janeiro (they have designed Canada House at The Olympics). As it gets dark, the beauty of the hotel’s locale, on Yorkville Avenue, becomes quite magical, with the 20-foot red fountain in front of the hotel, and, far behind, Fire Station 312. 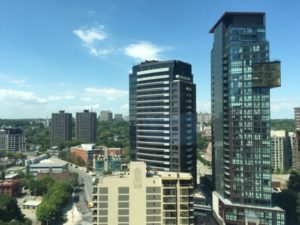 I am in 1620, a pleasing haven of taupe, with magnificent all-wall glass views over the surrounding area – the long desk is more a bench stretching across one window. This also serves as the coffee station, and, showing typical Four Seasons thoughtfulness, the espresso machine’s water container is not only filled but the capsules, Ristretto, Vivalto lungo and a decaffeinated Lungo, are labelled and explained. I leave my haven to head down to Café Boulud, redone since my last visit. Frankly, the original concept was not working. The restaurant’s design was too sock-it-to-you, with bold art, to bring repeat business, and prices were high. 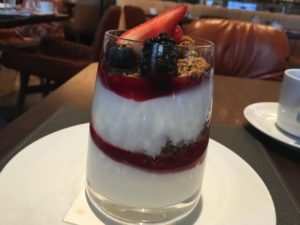 Now the restaurant has a St-Tropez leather and lights feeling, by Martin Brudnizki, and prices have been dropped, with average spend unchanged – patrons tend now to choose three courses rather than the two they had before. And the number of diners has soared, from a typical 45 on a Saturday night to today’s average 270. I particularly love the new design’s bar, with ten proper sit-up counter seats so you can see what is going on in the restaurant around you: I dined off a signature flat iron steak, from Cumbrae’s, a collective of 90 farms in Canada run by Stephen Alexander, a butcher who moved here from Victoria, Australia. 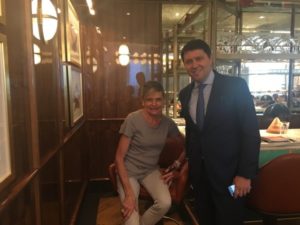 Of course, being Four Seasons, my steak knife was Laguiole. And naturally, thinking of the absent boss of this luxury hotel, I had to have a glass of Xinomavro Boutari Naoussa Reserve 2008, in honour of the hotel’s GM Dimitry Zarikos, currently back home in Greece on holiday. Never fear. The luxury hotel is temporarily being looked after by its manager Thomas Krooswijk, whom I last saw when he headed the food product at Four Seasons Beverly Wilshire in Los Angeles (he has been so lucky, he admits, learning from his father, Tom Krooswijk, the amazing GM of Hotel de l’Europe in Amsterdam, as well as Beverly Wilshire’s Ben Trodd  and now, here in Toronto, from the guitar-loving Greek. I did not, by the way, have Greek yoghurt at breakfast, and neither did I choose the suggested Canadian special, namely lemon ricotta pancakes with sour cherry, maple syrup and whipped cream. This area, Yorkville, was, incidentally, sometimes called music capital of the world in the 1960s – SEE THE VIDEO BELOW