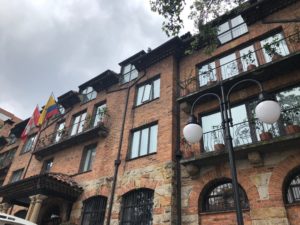 After a splendid introduction to Four Seasons’ presence in the Colombian capital, the gal was driven 15 minutes to Four Seasons Hotel Casa Medina Bogota. Casa Medina was finished in 1946 as an apartment house: developer and architect Santiago Medina Mejía, after whom it was named, deliberately created a traditional Spanish-style palatial mansion, furnished with wood, tiles and other bits rumoured to have been scoured from Colombian convents.  Goodness knows where he found the formidable lady (above) whose portrait hangs in the hall. Since young and aspiring Colombian women do all they can to enhance their looks, it is doubtful if La Senora Maria Thadea Gonzales, who became Marquesa de S Jorge de Bogota, would stand much chance today. 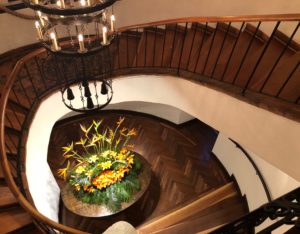 Weekdays, once again, all 65 rooms are filled with business guests. Weekends, a crowd about 15 years older, on average, seem just to revel in this magnificent building. There are inner courtyards with seating among living greenery. The restaurant here, Castañyoles, is one inner courtyard that has been glassed over, its interior walls thus brick, partly covered with living wall, or glass. Flooring is patterned tiles, suitable for the cuisine, normally all-Mediterranean but I coincided with an Italian promotion, highlighting dishes culled from Four Seasons’ hotels in Florence and Milan (I had a great starter of deep-fried calamari, large enough, as is the Colombian wont, for at least four people, and the side of asparagus was honestly better than anything I can buy back home, which usually comes from Peru). 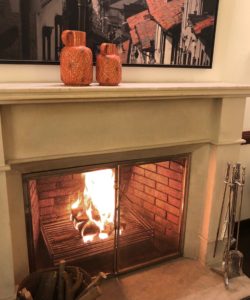 Several of the inner courtyards and public rooms have real-log working fires, as do some bedrooms.  I was lucky that room 422 had a fireplace and a keen young front desk man arrived with a pack of firelighters and in no time had a blazing fire going. The room looked out two ways, into the treetops of a courtyard and also into a street. I had the same textured drapes as in the other Four Seasons, the same local toiletries (Acacia dl Amazonas toiletries  from Loto Del Sur), and, once again, a simple-to-use Nespresso machine. Once again the gym is 24/7, but here it Technogym and, to be honest, somewhat limited in scope.  If Casa Medina addicts want exercise they can walk the oval stairwells, looking at 1946-vintage stained glass on the way.  For me, it was 60 stairs from fourth floor to lobby, arriving near the VIP entrance which has a grand piano all ready to serenade a Head of State on arrival. 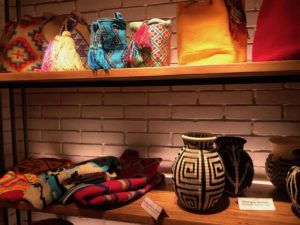 Handcrafts to buy enroute to the restaurant

And these people certainly come. A stately mansion just across the street already has the UAE flag flying and once the occupants have finished installing their own security this will be the UAE Embassy.  Personally I think they will love this luxury hotel, its historical feel and its gorgeous antiques and the staff who have so much passion. They will undoubtedly find the Colombian coffee is not far removed from their own brews, and they will probably buy up the shelves of Castañyoles’ deli boutique, lock, stock and barrel (and if they want night life, Four Seasons Hotel Casa Medina Bogota works with an Uber-type transport service that can get them over to Zona T fun in quarter of an hour). HERE YOU HAVE VIDEOS OF 422, AND BREAKFAST