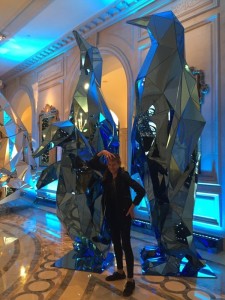 Well, what CAN the gal say? It is not often one finds oneself in a Brobdingnagian situation, surrounded by bigger-than-thou blue glass origami penguins, plus one silver-glass origami polar bear. But one of the many magical features about Four Seasons George V, Paris, is that this luxury hotel constantly surprises. Here Jeff Leatham first showed Europe how hotel lobbies could become galleries for floral art, not so much church-type flower arrangements but flowers with lots of stalks balanced at odd angles in tall cylindrical glass vases. And Jeff Leatham has gone on to be more and more creative. His Christmas decoration here, in the hotel lobby, is echoed in ten main storefront windows in Barney’s, New York. Oh what a coup for this hotel. 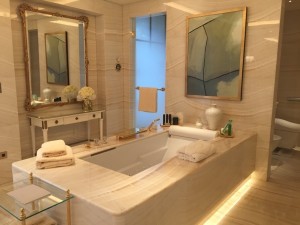 The hotel‘s GM José Silva, a Portuguese–Canadian, wanted to be an architect. He is also a serious foodie. Put the two interests together and you have marketing dynamite. The hotel’s sensational new George restaurant, Mediterranean food in an icy-white Pierre-Yves Rochon theatre with Lalique sideboards and one significantly-signature Baccarat chandelier overhead, is a proven success, immediately. Even now, when Japan Air Lines has pathetically halted flights between Tokyo Narita and Paris, citing demand down 60%, the restaurant does two full sittings every night. An extra feature, by the way, is that the servers have no uniform. They wear their own clothes, which turns into a delightful fashion parade – there are many cities where I would not want to have to watch the result but here in Paris it is as delightfully pleasing as the last haute couture catwalk shows were ghastly. 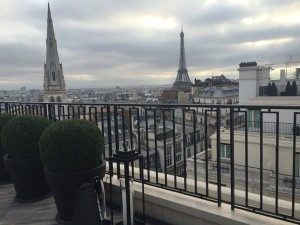 View from the Penthouse Suite

I was shown the hotel‘s latest suite, a 2,230 sq ft Royal Suite, champagne-hued with an enormous terrace. The bathroom is totally gorgeous but I do wonder how John Kerry, who apparently slept here last night, managed to squeeze into what I would call a somewhat miniature bathtub. The answer, of course, is that being American he undoubtedly showered and the shower head can easily accommodate his six foot three frame, plus his full head of hair of course. I was also, this visit, taken up to see the Penthouse Suite, which has a divine eyrie conservatory for intimate breakfasts looking out over Paris, and when the weather allows you can go out to its triangular terrace, as if to try to touch the Eiffel Tower. 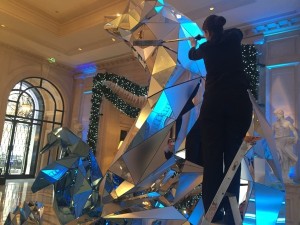 A penguin being titivated

Back to the boss of this luxury hotel. His enthusiasm never flags. Next up will be building real conservatories either side of the inner courtyard. One will extend George restaurant, the other the Galerie walkway en route to Le Cinq restaurant. As part of his mission to make the hotel the centre of superb dining in Paris. José Silva is concentrating on enhancing the cuisine in all three restaurants, Galerie included. Next after that, comes the creation of a serious spa and a more-than-doubling of the size of the indoor pool, which will mean taking the hotel, which opened with 320 rooms, down to 200 rooms and suites. And all the while meticulous housekeeping keeps everything spic and span. As I leave, one of the blue penguins is being dusted.