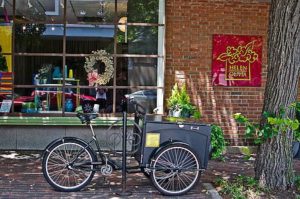 When there is such incredibly high turnover in much of the luxury hotel industry, it was heartening to be greeted at Four Seasons Hotel Washington DC by a doorman, above, who had started at the hotel 37 years ago…. wow.  And, of course, this being a Four Seasons the public areas are one big Chelsea Flower Show of gorgeous arrangements, here done by Helen Olivia Flowers, an Alexandria VA company owned by husband and wife Charles and Rachel Gang, who bought from Craig and Marianne Raub (who named the company they founded in 2005 after their grandmothers).  Really, says the gal, Four Seasons as a brand reigns supreme when it comes to flowers. But there are other things that make this 211-room hotel unforgettable for its many loyal followers. 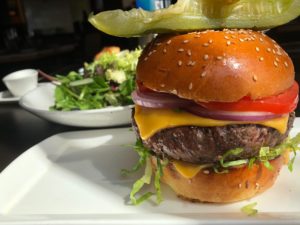 The GM, David Bernand, comes bounding in.  He is a triathlete, and says he gets ideas when he is out training. This winter he is going to do Bourbon On Ice pop-ups, three igloos holding up to eight, offering warming fur wraps to those gathering there for hot food and, presumably, hot drinks.  In January he will be celebrating the tenth anniversary of Bourbon Steak, the Michael Mina restaurant that has been a sell-out success since 2009 – Washingtonian magazine says it is 2018’s best steakhouse in town. Well, it was just the opportunity, I felt, to try a real American burger.  See it on the right, American wagyu and cheese and pickles and yes, it was delicious, though I left the bun. 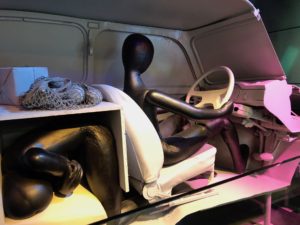 How to hide in a car – Spy Museum

There is so much going on here.  2019 is also the 40th anniversary of the hotel, now owned by Strategic, so expect special celebrations.  Behind the hotel, by the way, it looks as if the brutalist-style  West Heating Plant might finally be converted into 56 residences, but not by Strategic.  It seems that the basic shell has to remain, but the architect who will do the conversion is David Adjaye, who has designed the striking new Smithsonian National Museum of African American History.  I drove past this square building, looking like an outsize ladies’ skirt, three flounces but formed of dulled brown metal. 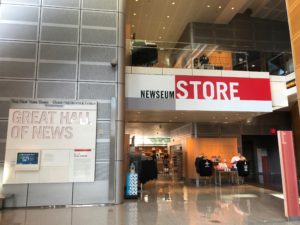 I did get to two museums, both spectacular, and, unusually for Washington DC, pay-for.  The International Spy Museum has lots of interaction for kids but it fascinates adults too. The Newseum, opened in 2008, is heavily funded by, and promotes, Bloomberg, NBC, Time Warner and other household names – it is amazing to see, pinned up, actual front pages of today’s top world newspapers as well as all daily papers from around the whole USA.  But, back at the luxury Four Seasons hotel, I continued to be amazed, by the unique in-house aroma, Georgetown Gardens, specially blended by New York-based Air Aroma, whose other clients include Aston Martin and Dom Pérignon. And soon, I heard, the flower displays will have to compete with 23 Christmas trees, each decorated by a local artist and all to be auctioned in aid of Washington Children’s Hospital.