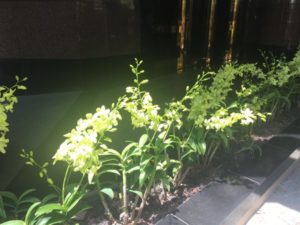 A living hedgerow outside the main door

The gal coincided with the final three days of Chinese New Year, which in Singapore is even more elaborate than elsewhere, it seems. Walk out of The Regent Singapore, A Four Seasons Hotel, and you pass, on either side, 45 inner-lit red lanterns, as above. Ten minutes later, with progress held up by interminable traffic lights for pedestrians – and in Singapore you do not want to disobey traffic lights in case one of the people near you is an undercover policeman – you arrive at its sister hotel, Four Seasons Hotel Singapore. At this luxury hotel you have decoration outside, too, real-live orchids, on one side. 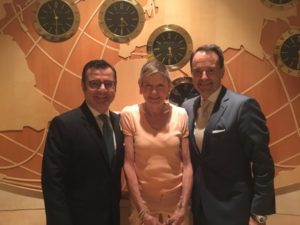 Four Seasons Hotel Singapore is where top CEOs stay, to be discreet. Want a lobby where you and others hang out?  Stay here if you want to get to your room or suite without interruption, and what is fascinating to me is that you also have privacy back down on the ground floor if you are in the bar or one of two the hotel’s two restaurants, 190 – named for its address on Orchard Boulevard. Separating bar from restaurant is a walkway that turns through 190 degrees and takes you, flanked by Club 21 designer retail owned, like the hotel, by B.S. Ong, to Orchard Road. But if you do sit in either bar or restaurant you do not feel ‘on show’. Many hotels now stress that they are close to retail or that they have their own retail. Peninsula hotels in both Beijing and Shanghai can offer you 50 or more top brands in their lobbies, and, to take another destination, in Dubai you have superlative shopping at easy reach from Kempinski Hotel Mall of the Emirates (which also offers indoor skiing) and Raffles Dubai. But here in Singapore,  this lovely 254-room hotel has been, since it opened in 1994, connected, by internal walkway, to the Singapore Hilton, also Ong-owned. 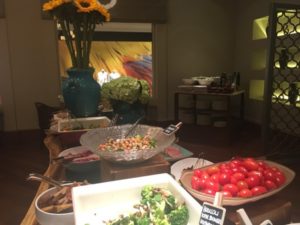 Looking along the antipasta buffet and through to retail

Twenty-three years ago being integral with retail was ahead of its time, and now that Club 21 walkway has become even more luxurious. What else is new at this lovely hotel, run by Lebanese-heritage Canadian Antoine Chahwan, who I had first met in Bahamas when he was GM of Four Seasons Hotel Exuma (now an adult-only all-inclusive Sandals)? I think this is a prime example of new luxury, under the radar when its comes to promoting itself. Its main entrance is on Orchard Boulevard, parallel to Orchard Road and as soon as you pull up the staff manning the door welcome you back, with genuine enthusiasm.  They seem to know returnees, even after more than a year.