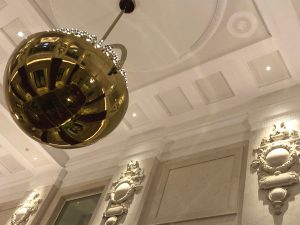 Columns and chandelier in the original Rotunda

Four Seasons Hotel London at Ten Trinity Square is as close as a luxury hotel can get to the Tower of London, a mere 300 metres away – see the Tower, above. The hotel is actually within the legal bounds of the Tower, and every three years, which happens to be 2020, Beefeaters, as representatives of the Tower, ceremoniously inspect it.  The 100-room hotel’s building has been full of ceremony since it was opened in 1912 as the columned headquarters of the Port of London Authority – it was designed, says the gal, by Sir Edwin Cooper. Hotel designer is Bruno Moinard, 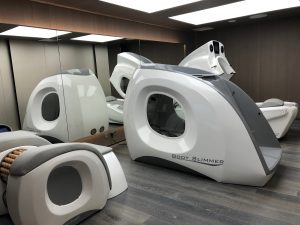 Body Slimmers in the gym

There are nine heritage suites, some of which have floors on two levels There are also, by the way, 34 lettingesidences, with up to four bedrooms.  Personally I really like the 175 sq m Presidential Suite, #302, which has 1.5 bathrooms, Lorenzo Villoresi toiletries, and, so stylish, the Parlux 3200 hairdryer sits in a fabric bag in a suede box. Other luxury pointers? The Nespresso machine has hotel-logo paper cups as well as Royal Doulton mugs, and notepads by telephones are gold-printed. I also really appreciated the hotel’s excellent in-house wellness, which includes four Body Slimmer machines, and an indoor pool. 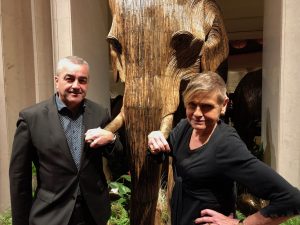 There is a hotel-run Private Members’ Club, which I did not have time to visit.   Anne-Sophie Pic cooks for the Club and for the hotel’s Michelin two-starred La Dame de Pic, but I was thrilled to be dining at Mei Ume, designed by AB Concepts.  It is really delightful, and the menu features mainly Japanese starters and Chinese main courses.  I had seven-kind moriawase, assorted sashimi, followed by roasted black cod marinated in yuzu soy with karashi mustard of Brassica juncea, served on a grill on top of a 10 cm-tall pot. I was dining with Belgian GM/RVP Vincent Hoogewijs. 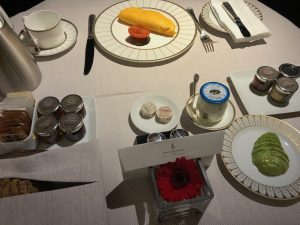 Main breakfast is served in the Rotunda but I had an early start so checked out the leather-covered room service menu.I passed on a hotel special, ‘Trinity sugar-free chia bircher mueseli’ with soy milk, choice of added banana or mixed berries.  My plain yoghurt and omelette came on gold-patterned Rosenthal, and the wholewheat toast had both salted and unsalted Netherend Farm butters, from Gloucestershire, and a selection of English (Tiptree) and French (Alain Milliat) preserves.  I had plenty of excellent coffee in an Alfi stainless pot. This place has lots of style, I thought as I headed over to Tower Hill station, the quickest way to get to Heathrow, via Paddington and Heathrow Express. SEE SUITE #302, BELOW