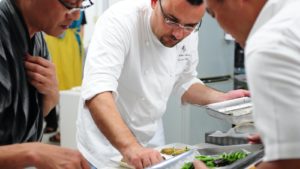 Do many chefs talk to their vegetables?  That is what Toshio Tanahashi does as part of his shojin ryori, Buddhist Temple cuisine – and he will show what it is all about when he guest-chefs at the luxury Four Seasons Hotel Hong Kong November 20-22 2017. Speciality dishes include agemono and yakimono, with croquette of lily bulbs and truffle and spring rolls of purple potatoes and grapes.  Tanahashi-san was in the corporate world until, at the age of 27, he joined a temple near Kyoto to undertake a three-year shojin apprenticeship, after which he opened Gesshinkyo restaurant in Tokyo. What can be called meditative cooking will see guests at his Hong Kong dinners helping hand-grind sesame seeds and they will learn the cuisine’s philosophy – and watch him talking to the vegetables which they will subsequently be served as part of a seven-course vegetarian dinner.