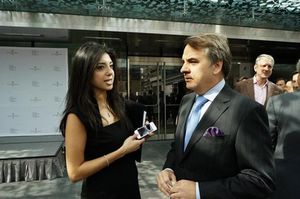 Beautiful people attract other beautiful people, and you would, correctly, judge lots of the BPs to be found at Four Seasons’ flagship luxury hotel, in the company’s home town, Toronto. The hotel attracts the BPs because of its brand reputation, the level of its service and the charisma, as well as the professionalism, of its whole team. The 265-room hotel is coming up to its second birthday but hotels are not, unlike Prince George, photographed to celebrate birthdays. Privacy has always been an issue when it comes to photography in and around top hotels, although today’s selfie world is blurring the picture. 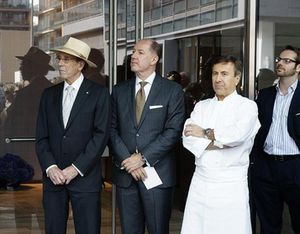 Yes, this was an extremely important hotel opening, in October 2012. This is what potential developers of future Four Seasons properties would look at, before signing on the dotted line. Lots of people put heart and soul into making sure it was right. Four Seasons founder Isadore Sharp cast his magic over it, and his wife Rosalie Wise designed Café Boulud, an eclectic all-day restaurant with lots of bold colour and wacky art. Daniel Boulud carefully designed the menu (now what will he do when the restaurant has a make-over, February to March next year?). 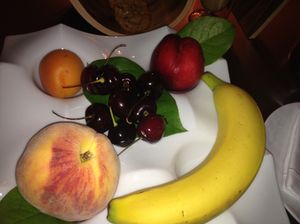 Other important people making this a BH, beautiful hotel, include the designing duo of George Yabu and Glenn Pushelberg, whose fabulous firm Yabu Pushelberg started here in Toronto before switching some operations to New York. And Dimitri Zarikos was enticed away from the relaxing beauty of the 750-acre Four Seasons Provence, now Terre Blanche, to come to Toronto to move from the 1972-vintage old Four Seasons to the new. The result, as far as the rooms are concerned, is clean and simple lines with lots of unvarnished oak, for floors and walls. I love the simple-pull curtains, having a desk, or rather a table, that stretches from one wall to the opposite wall, window side, and the simplicity of welcome fruit. Nothing is messy, here – in bedrooms, at least. 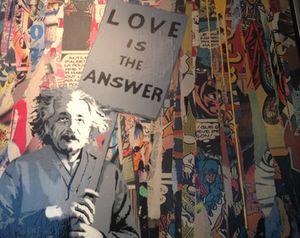 I admit it is rather a surprise to see how messy is some of the art in Café Boulud – but then it will go when Martin Brudnizki arrives to redesign Café Boulud. If you have not chosen room service’s quick breakfast (choice of cereal or warm breads, fresh juice, beverage, all for C$19++), you can breakfast in leisure in the Café, looking at a supreme BP if B stands for Brain, a certain Albert Einstein, as interpreted by Los Angeles street artist Mr Brainwash. I wonder at the phrase ‘If love is the answer’ and the funniest quote I can find is ‘If love is the answer, could you please rephrase the question?’ (Lily Tomlin). Yes, there is so much in this luxury hotel that makes the BP smile, and come back.