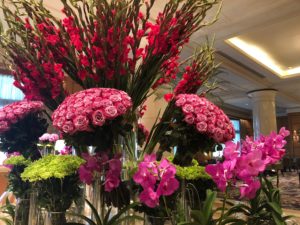 Back in the metropolis that is Cairo, there are two luxury Four Seasons hotels, separate owners so not as much similarity as you might think. Choose which bank of the Nile you want to be on. The gal chose, first, Four Seasons Hotel at Nile Plaza, for a stay that was even more floral than is the Four Seasons’ norm. There were massive displays, done by Flower Power in Jeff Leatham style. The main ballroom was being turned into white heaven for a 900-strong wedding that night – see a photo above. Flowers, all white, hung from the ceiling, and sat in crystal vases on all the dining tables. A white marble-look floor had been laid above the usual carpet to complete the look. But, said area communications genius Sherry Adel, whose turquoise nails complemented all that white, the hotel is used to such an extravaganza. 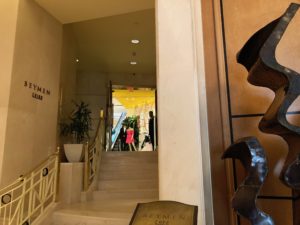 From the lobby, straight to Beymen Plaza

It has done 240 weddings in the last 365 days, or rather nights (a big wedding runs from around 9.p.m. through to dawn). This hotel is certainly a Middle East social hub but it is also the venue for high-powered meetings. It is owned by the mighty Talaat Moustafa conglomerate, which also owns, real estate-wise, the adjacent Beymen mall.  Head around a corner in the main lobby and you go straight into the mall, for shopping heaven, all the best that Turkey’s Beymen retail can offer.  Here you find Celine, Dior, Dolce & Gabbana and so many more big names, all of which helps the 375-room hotel fill its rooms with shopaholics. But there is plenty more to do here. The fifth-floor pools, both indoor and outdoor, are really popular, and the LifeFitness gym has all-wall windows for looking across the Nile (unfortunately at other brands, both biggies beginning with S). 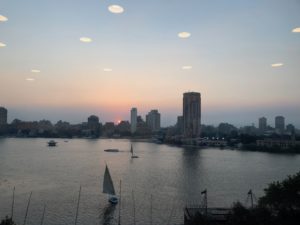 I loved having a two-metre-deep balcony, with snow-white towels on the loungers, running across the width of both rooms of suite 2001: I fortunately realised, before going out the first time, I needed to use one of those towels as a wedge as the French windows do not seem to want to stay open and there are no handles on the outside.  Once again I loved the activity, far below at ground level, and watching fellucas glide back and forth across the river. Sunset came, and quickly went; then within a few minutes many of the boats turned into psychedelic light shows, each a kaleidoscope of dayglo colours.  I made my way back down to the third floor, and there my dinner date awaited. 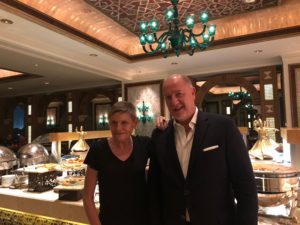 This is GM Dimitri Zarikos’ second stint here (he was pulled to Cairo in 1998, quite quickly after arriving at Four Seasons New York, which he had joined, after the company-standard five interviews, from The Essex House, in its pre-Jumeirah days). Now he can be more strategic here: to give but one example, thanks to careful planning this luxury hotel has in the last year raised the number of locals dining here by 23%. Since my last visit, in 2010, the level of the spa has also been considerably enhanced (it is Phytomer for facials, the best there is, says a therapist from Bali). Christian Lisci’s fresh-today pasta was the hit at Bella restaurant and we drink another ‘local’ wine, Ch de Granville’s 2016 Cabernet Sauvignon Merlot, using grapes brought chilled from Bordeaux and pressed, fermented, blended and bottled here, by Heineken-owned Al-Ahram. This city never ceases to surprise: my final amazement, as I waited outside the main door on departure, was at a polished black Porsche Cayenne driving at about 20 m.p.h, through the doorway’s porte cochère covered area.  A local man in white gallabiyeh was in the driver’s seat, presumably working the foot pedals.  On his knee sat a curly-headed female toddler, no more than three, with her hands, and hers alone, steering.  This is Egypt. NOW SEE SUITE 2001