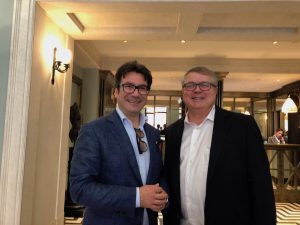 German entrepreneur Christoph Hoffmann declared that 24 hours is not enough – so he called his exciting new-luxury hotel group 25hours.  It is, however, really amazing how much luxury ‘stuff’ can be packed into 23 hours, as the gal found the other day in Rome. First stop was the new-look Hôtel de la Ville, transformed magically by its owners, Reale Immobili, and on behalf of the lessees, Rocco Forte Collection, by designers Olga Polizzi and Tommaso Ziffer. The 1924-vintage luxury hotel, which had become as much a grande-dame of yesterday as its neighbour at the top of the Spanish Steps, now epitomises luxury for 2019 and beyond. Everyone wants to have a look (Insider Travel Report‘s James Shillinglaw was there that day). It is beautiful, with such memorable touches as a wall of mirrors, above 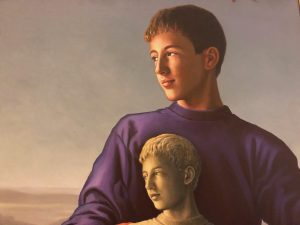 Portrait on the stairs, Westin Excelsior

As well as history and design, part of the success of the De La Ville now is it choice of diningenues, inside or out.  I loved my lunch, a stylish caprese followed by mixed seafood.  I really enjoyed talking with the GM, Francesco Roccato, an absolute professional with more than a touch of theatre about him (how did he get here? He met Sir Rocco at an ILTM in Cannes, when he, Roccato, was working for Ferragamo’s Lungarno hotels). But then GMs in Italy do have such flair about them.  Some are born with it; some inherit this admirable quality.  I dined with Marc Lannoy, a Belgian who is as effervescent as any Roman – both he and his wife, a charismatic  Mexican who heads the Spanish-speaking media pack at The Vatican – are right in the centre of any high-powered sample of high society. 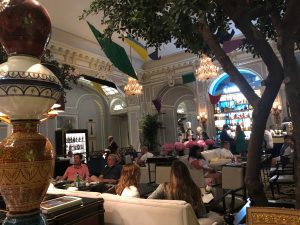 Marc Lannoy runs The Westin Excelsior, where I was staying. First, there was a welcome cocktail for the 200-plus guests at this 356-room, Katara-owned hotel who were, like me, going cruising tomorrow.  The cocktail included, by the way, a fascinating introduction by the podcaster who was to tell stories on the ship – see a video, below.  Then Marc-and-Madame, and I, walked nine minutes to another Marriott hotel, St Regis Grand, where an amazing transformation has taken place.  What was a funereal lobby before is now a theatre of creativity as a result of the combined skills of designer Pierre-Yves Rochon and a GM who should be a stage director, the marvellously-named Giuseppe De Martino.  Video images flashed continuously on a semi-diaphanous ceiling-high curtain behind us as we joined others, in a full restaurant. A must-have here is the caprese trolley, see a video below. 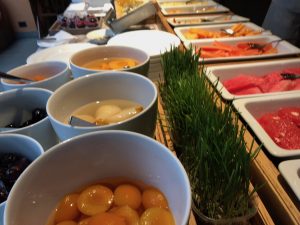 And then I slept like a log, in the Westin’s suite 643, and I used lots of energy taking the 84tairs up and down to the lobby as it was a non-stop art gallery enroute. In the morning I had a ten minutes’ walk to breakfast atop The Eden, for a priceless rooftop view looking over the Borghese Garden to The Vatican. GM Luca Virgilio was away on business but his newly-promoted deputy, Pietro Zanzot, showed me the adjacent kitchen, where pizza-making classes are held, for adults and kids. My cappuccino came with my photo on it. I commented that this is a luxury hotel where there are constant surprises, every staff member looks catwalk-trained, and grooming is faultless (Italy, once more!). Even the restaurant hostess’s fabric corsage seemed to say Versace… and I was sent off with a much-appreciated gift, Sonya Dakar PF30 DailyShield face+body sunscreen. Yes, I had forgotten to bring any. SEE, BELOW, SUITE 643 AT THE WESTIN, STORY-TELLER JASON AT THE PONANT PARTY, AND THE CAPRESE TROLLEY AT THE ST REGIS