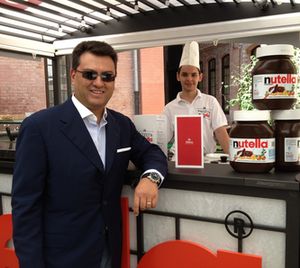 Alessandro Cabella and his Nutella stand

The gal has never exactly been a Nutella fan but never mind.  As Girlahead increasingly becomes the Flashman of today’s luxury world – copying that fictional swashbuckling hero in being wherever anything significant is going on – so she learns more about Nutella.  Its owners, Ferrero (who invented Nutella in 1944), seem determined to get into every luxury hotel in the world, and on June 22nd, 2013, the first Nutella kiosk stand was unveiled at Hilton Molino Stucky in Venice.  Hotel GM Alessandro Cabella invited  top media, and their kids, to come and try Nutella milkshakes, icecream, cakes, biscuits (the only thing missing was Nutella facecream but perhaps that is next on the list. 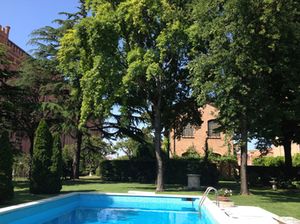 The Fortuny garden (the Hilton is to rear, left)

There were continual surprises during that stay back at the Hilton, which is to the west end of Giudecca island and therefore divinely quiet after the hurly-burly all along and around the Grand Canal and San Marco.  I arrived by water taxi, straight to the hotel’s private dock, and immediately headed out for an appointment next door with Fortuny.  Yes, Fortuny, THE headquarters of this world-renowned fabric company.  In the private Fortuny garden, with a pool used by the owners, brothers Maurice and Michael Riad, when they come from New York.  When THEY are here they can go into the factory, centre back of the image (the Hilton is to left back). Only 20 others, the workers, can enter, to see how plain Egyptian cotton is dyed by a secret process developed by Mariano Fortuny, 1871-1949. 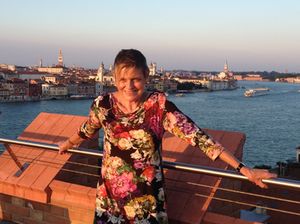 On the Hilton rooftop…

Wow, what a multi-faceted genius he was, photographer, stage designer (for La Scala, for Bayreuth)… with his muse, Henriette, whom he later married, he created the plissé silk dress known as the Delphos. You know what I mean, with tiniest pleats from top to toe.  And he developed this amazing Fortuny fabric printing, always two colours, 70-plus patterns with names like Carnavalet, Medici. It shimmers and looks like velvet.  Residential designers love it, for A List homes, or second homes – at a standard 350 euro per metre (it is 1.4 m wide) it is beyond the budget of hotel designers and anyway, the cotton is not fireproof.  So I never got into the factory but you, like me, can visit the showroom, open daily except Sunday, and like me, you might come away with an offcut big enough to make into an eyeglass case. 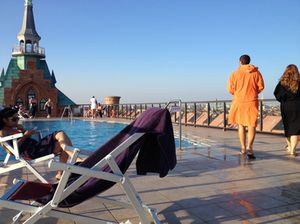 .. next to its fabulous rooftop pool

Fortuny, with Rubelli and another local fabric house, Tessitura Luigi Bevilacqua, is sponsoring the 2013 Biennale, where this year the Venice pavilion designed in 1932 by Brenno Del Giudice celebrates local fashion art. The sensible Fortuny fans of course stay, like me, at the Hilton, which has a Biennale-included package.  This significant eight-floor brick structure was indeed a working flour mill (sadly owner Giovanni Stucky was killed by an angry employee in 1910).  Wonder what he would think if he could see today’s rooftop swimming pool? Every evening this summer this turns into a Moët Ice Imperial hang-out, with yachting-white uniformed model-like employees serving the most more-ish cocktails, champagne on the rocks with lime and mint, and you can drink them and drink them and just feel fabulous.  Move next door, to the rooftop’s indoor Sunset Bar, if you prefer shade, or the weather turns. 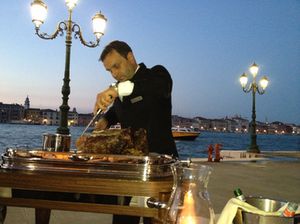 If the weather really turns, tour the art inside the hotel, which works with local gallery 795 Giudecca on changing shows.  Now through end of July is Monica Marioni; August celebrates flying over Venice; on September 6th Giulia Nuti sculptures start a six-week stint, and from October 18th to Christmas is the intriguing Venice ‘storming’, by Francesco Zayatta.  But it is time to think about food again. If Nutella is not your thing, there is a lovely casual-comfort local restaurant, Bacaromi, which designer Paul Lucchetta tells me is based on a Venetian kitchen, with tiled floor.  Like its neighbouring restaurant Aromi, it spills on to the quiet canal walkway in summer. I am not sure how a standing rib roast on a magnificent trolley fits Aromi’s Mediterranean theme but who cares (the beef is Italian, and sensational). 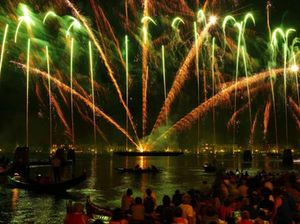 Yes, there is always something happening here and, says Alessandro Cabella, he has not finished yet.  On Saturday July 20th, 2013, he will turn the poolside into a one-night proper restaurant for the annual Redentore festival, named for the church just along Giudecca.  Always held on the third Saturday of July, this commemorates the ending of the first plague in July 1577.  Every year, thousands take food and drink onto boats, of any size, on Giudecca canal, and around midnight a 45-minute firework display is apparently spectacular (and no, this time Girlahead-cum-Flashman will not, sadly, be at this particular luxury hotel).