View down from one of The Palace Hotel Tokyo's bedrooms

It may not be cherry blossom but flowers are blooming in Tokyo.  The gal saw them, lovely displays at all the luxury hotels she has been to these last few days – in order, staying at Shangri-La Tokyo, Grand Hyatt Tokyo, Four Seasons Tokyo at Marunouchi, Conrad Tokyo and Ritz-Carlton Tokyo.

And there is one more fabulous property coming up.  The ‘new’ Palace Hotel Tokyo opens May 17th, 2012, at 1100 precisely (who will be the first guest? Lips are sealed but expect a member of the Imperial Family).

The old hotel, 1961 vintage and looking it, closed February 1st, 2009, and has been completely rebuilt.  The owners, Palace Hotel, worked with architects Mitsubishi Jisho Sekkkei Inc, the people who did the wedge-shaped Peninsula Tokyo.  But this, the Palace, is an extended-S, sharp-angled grey stone and glass building.

Every one of its 290 rooms has a view over the Palace Gardens, and 50 percent of rooms have balconies, with room for at least two chairs and a table.   Yes, this will be one of the most-talked-about new hotels of 2012. 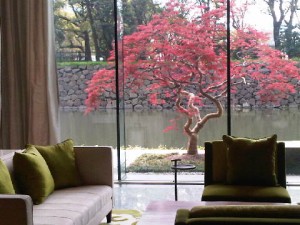 Oh so Japanese - looking out from a corner of the calm lobby, Palace Hotel Tokyo

Even the lobby – another tall affair, so beloved of Japanese used to compact surroundings – looks into the Gardens, or at least a wall of them.  Look past a blooming tree at a rampart of giant stones.

With the moat immediately between window and stones, you have another element that is so vital to the Japanese way of life – water.  The interior designer of this hotel, by the way, is Werner Aeberhard of GA International, and the hotel does have many similarities to his other grand work across town, Conrad Tokyo. 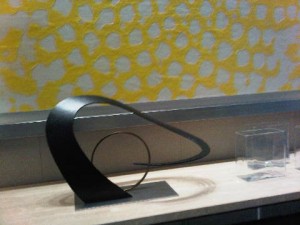 I was shown round by Masaru Watanabe, the ultra-keen, ultra-young (for a Japanese top hotelier) GM.  He says 81 percent of his 450-strong employee team were working in the hotel before.

The Concierge, Mayako Sumiyoshi, told me that she was trained at Ritz-Carlton Tokyo.  We were, at that moment, looking at other fabulous areas of the lobby. One big art work looks, honestly, like splodges of scrambled egg that you see on all good breakfast buffets here.  Another area has a big floral abstract (not unlike one outside Piacare at Shangri-La Tokyo).  Sit there and think flowers. 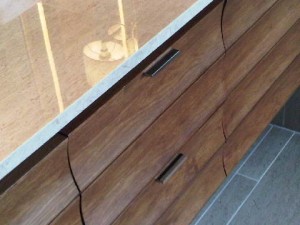 There will be flowers on the terrace of the 19th floor Club Lounge terrace, reached via six steps from the main inside lounge (yes, this hotel, like Grand Hyatt Tokyo, gives its club guests the choice of sitting outside, but sorry, inhalers, this terrace is non-smoking).

Bedrooms, by contrast, are somewhat minimalist, relying on the stunning Palace Gardens views through all-wall windows.  Base rooms are pale stone coloured, but one price-point up and you have the addition of some colour, what can only be called olive-oil hue.

This is used for throw cushions and boxes inside the white-interior minibar cabinets.  Love the way only a glass wall separates the bathing area from the bed part – and through that to the view (of course there are modesty blinds), and sink units have natural wood fronts.  Toiletries are Anne Sémonin.

The spa is Evian, only the second in Asia (the first is the ladies-only Evian Spa at Three On The Bund, Shanghai, the fabulous Michael Graves-reconstruction of a historic on-Bund building, masterminded at its launch by Alan Hepburn).  The indoor pool, which gives you a view of the Palace as you swim up and down, has an integral hot tub. 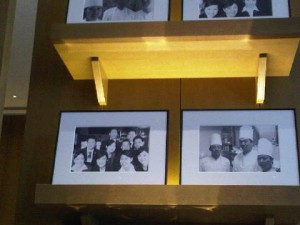 OH the restaurants at The Palace (which is a Leading Hotel of the World)!  The all-day Grand Kitchen, leading off the main lobby, has an outside terrace, a conservatory-feel garden room, and a big indoor area with displayed photos of today’s cooks and servers.  It also has a working bakery, right here in the restaurant.  Imagine the aromas..

Other restaurants are designed by Ryu Kosaka, who did some of the interiors at Mandarin Oriental, Tokyo.  These designs are simply breathtaking, making maximum use of solid blocks of different types of woods.  In one large area, for which you have to take your shoes off, the wood floor has been hand-sculpted, like a beach when the tide goes out: as you walk over, it feels like a foot massage.  Sensational – reminds me somehow of the same supernatural design that you find in marvellous MEGU Midtown in New York. 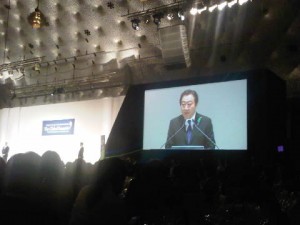 Sadly it will be impossible for me to be there for the actual opening of the hotel – anyway, you can be quite sure that the world and his wife (in Japan, at least) will flock round to check out the new look, and have afternoon tea.  There were quite a lot of Japanese, 95 per cent of them dark-suited males, at last week’s 12th annual Global Summit of the World Travel & Tourism Council WTTC.

This was the reason for many visitors to be in Tokyo last week. 1,200 delegates and some spouses gathered in the ballroom of Grand Prince Hotel New Takanawa for the opening dinner, before which Prime Minister Yoshihiko Noda gave inspiring words.

He really seemed to understand the importance of travel and tourism (or travelism, to use a word apparently just invented by Geoffrey Lipman, Assistant Secretary General and Spokesman of UNWTO).

Noda-san walked out after his speech, so fast that his minions were running to keep up. WTTC says this industry will grow by 2.8 percent this year, directly contribute $2 trillion to the global economy and sustaining some 100.3 million jobs.   Tourism For Tomorrow awards, monitored by the passionate Costas Christ, were announced. 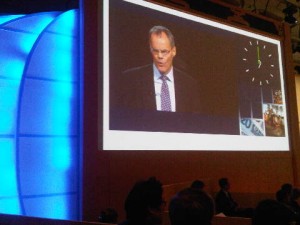 In a main session, Frits van Paasschen - unusually in a tie - was one of the top industry speakers

Over the next day and a half, the main-work part of the Summit, held in a 270-degree tiered auditorium, saw a bevy of top hoteliers, including Taj’s Raymond Bickson, Hilton’s Chris Nassetta and Starwood Hotels & Resorts’ Frits van Paasschen, sharing thoughts on challenges for today and tomorrow.

The main consensus resulted in lead issues of governmental involvement (or non-involvement), visa issues and challenges of finding and training talent, and leading the way in climate change.  The next global Summit will be held in Abu Dhabi, April 8-12, 2013.