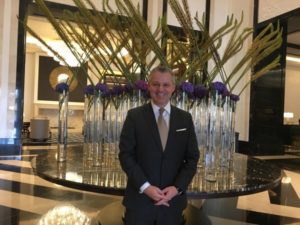 The Jordanian capital’s existing luxury hotels, Four Seasons Amman and InterContinental Jordan, Amman, really do not need any more competition. Ernst&Young pointed out January 2017 that there are at least 1,000 new rooms, mostly luxury, coming up and yet this year occupancy across the city looks stuck at 44%, with a poor return for owners. Yet, as the gal found, those owners cannot stop. Dubai’s oligarch Mohamed Al-Alabbar, working as Eagle Hills rather than his better-known Emaar company, is doing St Regis Amman and W Amman, both of which are yet to open (Eagle Hills is also big in Aqaba, and doing things, also with Marriott, in Morocco and Serbia). 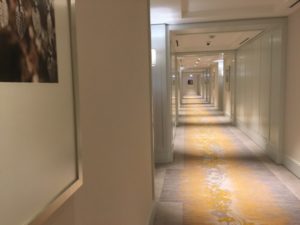 Mark Ancrum moved from Rotana, which is actually already here in Amman, to open the St Regis. It is across Amman’s Fifth Circle from the existing Four Seasons Amman: in front of the St Regis is a Sheraton, and going around the Circle are the about-to-open Fairmont, and, as yet a deep hole in the white chalky ground, a Ritz-Carlton – see the photo above, with Four Seasons Amman behind. St Regis will have 270 rooms and an adjacent tower will hold 79 enormous residences, of which only ten are left to be sold. Fairmont Amman, which has 317 rooms, is different from the other newcomers in that it is owned by a local construction and real estate tycoon who has never done a hotel before and it appears he and his entire family are having detailed input into what was originally a GA International design. 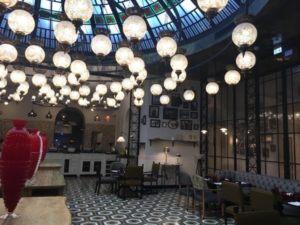 It is beautiful – look at the corridors, and the ceilings. There is an awful lot of white, which will cause housekeeping a little bit of a problem. Once again there are lots of eating opportunities, with steaks, and Japanese, and Jordanian, and a Viennese coffee lounge, appropriate for GM Christian Sack, who is Austrian. Black Sheep, who designed all the restaurants, have excelled in the all-day restaurant, Nür – it has lots of areas, lots of different rooms, but my favourite is the main Dome, with cascades of Middle Eastern lanterns hanging down, and walls hung with old black and white photos of Jordan’s Royals. And, a little touch but so sensible, the patterned tiled wall at the back of the image, here on the left, extends to the kitchen behind. Good luck to a luxury hotel that the owner has created, with his money and his input. SEE THE VIDEO OF A BEDROOM, BELOW.