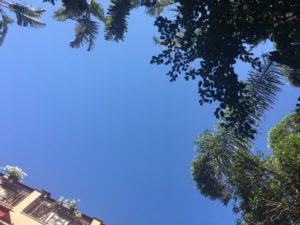 ForteVillage Sardegna (Sardinia) has something in common with Alibaba, whose creative founding CEO Jack Ma thinks he is running a country rather than a company. Well, this luxury holiday complex is similarly akin to a country, although at 63 acres it is still short of the 109 acres of the Vatican, the world’s smallest nation. Anyway, run with presidential style by the superbly inventive Lorenzo Giannuzzi, Forte Village has 750 bedrooms spread over eight resorts: especially during the peak season, August – which has a five-night minimum stay – occupancy is 100%, with 80% repeats, some for as long as three weeks. Add to this the fact that 600 of ForteVillage’s 1,200 workforce also live on-site and, says the gal, this really is a sizeable destination. 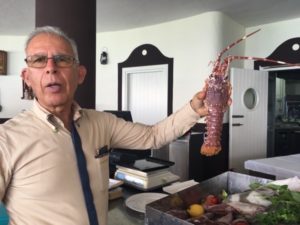 How about this for lunch?

About 65% of the hotel rooms are taken by families, so many will have more than two occupants, so it is fair to say that about 1,500, including children, are sleeping on the complex most nights. I was undoubtedly the only single-occupancy during my stay, and I was in ground-floor villa 150-L, my ideal of all the room styles. It is in Villa del Parco, with a quick entrance, via the hotel’s gorgeous back garden, to the spa and, super-important, the gym. Sports facilities are available by the dozens, a good thing as you can spend a tremendous amount of time, and consume a lot of calories, in eating magnificently. There are 21 venues in all, plus stands and kiosks in the resort’s shopping area. I arrived on the direct British Airways flight from London Gatwick and was really hungry. What a delight to go straight to a fish market, choose what you want, in my case calamari, with a superb salad buffet to start. 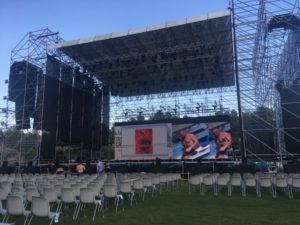 Yes, this really is a state of heaven, a small country which is always innovating. One recent addition is an arena which can seat thousands – they were rehearsing, that night, for Mamma Mia!, sorry I would not be able to stay for it (coming up are three classic-crossover singers, and then, on August 13th, 2017, Charles Aznavour). Lorenzo Giannuzzi first worked here, on reception, when he was 22 but he returned, as GM, in 1995, since when he has masterminded transformation and expansion. I likened Forte Village to one of my favourite books, Nevile Shute’s A Town Like Alice. According to the author, Alice Springs started with a generator to power the icecream machine to please the workers constructing what would become that city, in the middle of Australia. Here it all started with Mussolini planting pines to ward off mosquitoes, and later came Lord Forte, then simply Charles Forte, to build a single hotel. 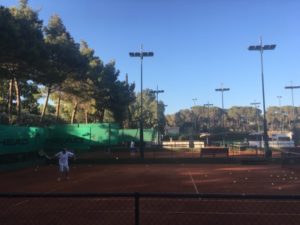 Lorenzo Giannuzzi is forever growing his empire – coming up is an aquapark, I suspect similar to Wild Wadi at Madinat Jumeirah in Dubai. In the last year he has added more retail, and yet more sports. Come to this luxury resort and, regardless which of its eight hotels you stay in, you have a choice of what he calls academies, say chess, led by Anatoly Karpov; cycling, with Cipollini; football, working with Chelsea; rugby with English international stars Will Greenwood and Austin Healey; table tennis, with Michael J. Fitch, and tennis, led by Australian coach Rocco Loccisano. As we drove past the array of tennis courts on a general recce of this entire luxury complex, there was Lorenzo Giannuzzi hitting as hard as he could – that young man is truly amazing, as we will find out…. MEANWHILE, HEAR HIM TALK, BELOW