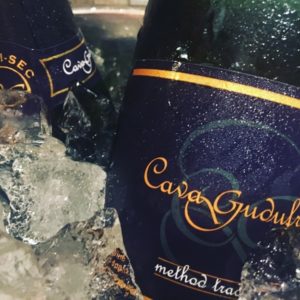 It is time to talk food at one of Israel’s top luxury hotels. Of course it is kosher, which means having two kitchens, plus a banquet kitchen, but, honestly, kosher food has improved so dramatically since the gal first tasted something absolutely flavourless at a restaurant called Bloom in London. Now it is world class, honestly, and the wines are too. Take Gamla 2014 Cabernet Sauvignon, from Golan Heights Winery, supervised by University of California Davis grad Victor Schoenfeld, Or think of Arza Winery, owned by the Shor family, whose winemaker Philippe Lichtenstein has been commissioned to help Hubey Pengdun develop an $8 million project in China’s Hubei Province. Israel produces excellent reds, whites – and sparklings. The Cava at the breakfast buffet in the 24th floor club lounge at InterContinental David Tel Aviv was really popular with the many tourists enjoying not only the views, but the food. 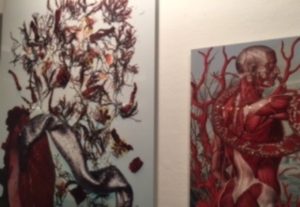 The lounge is a meeting point, too, for the many business guests, and their local contacts who like to talk here, for obvious reasons.   See, for instance, a video below of the breakfast spread, which included shakshuka, eggs baked in tomato purée or sauce, and of course there are always salmon varieties to go with bagels and sour cream. Interestingly, while Israel produces outstanding toiletries – this hotel uses –(Minus)417, from Dead Sea Cosmetics, and the Dead Sea bathsalts …. – and it has wines, and edibles, it does not appear to have its own home-produced china. I find mostly, in alphabetical order, Bauscher, RAK and Villeroy & Boch. RAK it was at dinner in Aubergine, the hotel’s intimate fine dining venue. 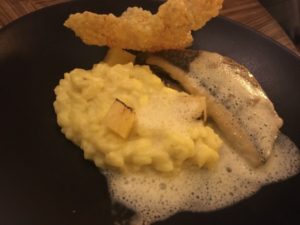 and yellow food, with seabass and curry sauce 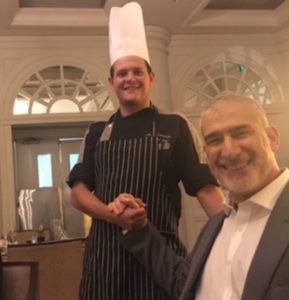 This luxury hotel’s GM, David Cohen, is fully supportive of what he calls his ‘home-grown talent’. Part of his support includes bringing in such guest-chefs as, planned for January 2018, Daniel Corey, chef of Luce in InterContinental San Francisco, for which he has held a Michelin star since 2011. David Cohen knows that inspiration is vital. With only 3.3% unemployment in Tel Aviv it is essential to do as much as possible to attract talented youngsters, especially in the face of competition from tech startups (for which this is one of the world’s megacities, he says). One blessing is that when they leave compulsory army service, men and women are given a considerable Government bonus if they stay in certain professions, which fortunately include hotels, for six months: the challenge then is that many want to rush off, to travel the globe, before going on to study at university.

NOW SEE A VIDEO OF THE CLUB BREAKFAST