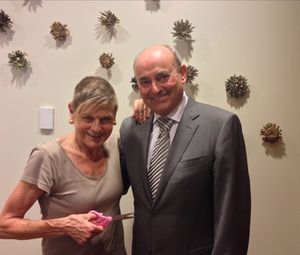 The gal really bonds with hotel General Managers who have passion. Bob Schofield, who runs Travel+Leisure’s top US luxury hotel, The Langham Chicago, has more beside – history. He started off as an accountant, in UK, got into hotels’ finance, in Jamaica and throughout Africa, switched to operations, with Starwood, started a private hotel for an ultra-rich US software tycoon (the Umstead in Cary NC) and, in August 2013, opened The Langham Chicago. Along the way he has acquired production skills worthy of a De Niro or Spielberg. We are photographed near a bunch of Langham-pink flowers and I borrow the butlers’ scissors, pink-handled of course. 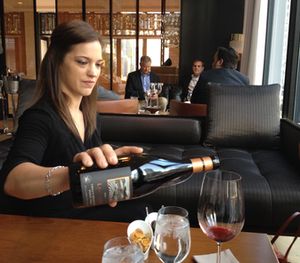 The server crouches as she pours wine

All the 230 staff of this 316-room hotel act as if they are professional mood actors. Highly trained, they improvise as necessary. A bar server knows she has to crouch down when pouring a glass of Lemelson Thea’s Selection Pinot Noir 2011 but she explains that actually it is more difficult balancing the not-yet-filled glass than it is the bottle. In Travelle restaurant, which leads off the bar, server Mike, who is a show director in his spare time, enthuses about his favourite dishes (sorry Mike, I choose something completely different, will follow your suggestions next time). Chicago is restaurant-heavy, and in summer places to eat hatch like rabbits on every available outdoor spot but yet Travelle, a hotel restaurant and on the second floor, only reached by elevator, is full. 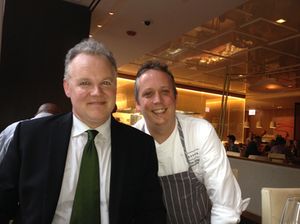 I am lucky enough to be surrounded by theatre, tonight. I can look through to the glass-walled kitchen, designed like the whole of Travelle by David Rockwell, but the chief chef, Tim Graham, comes out to talk. He is always experimenting – as is my dinner companion, a Minnesotan magician called Eric Ziegenhagen. Back when he was 18 he had a play performed professionally off Broadway. Now, here in Chicago, he produces shows that he takes to peoples’ homes, a 30-minute break from social (or, in Chicago’s case, political) chit-chat. His day-job, however, is Social Media Manager for this hotel, which includes monitoring TripAdvisor – the Langham has been #1 in Chicago since day one. 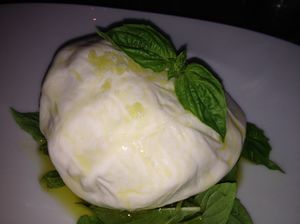 Tim Graham’s experimental caprese (the tomatoes are inside the mozzarella)

So I learn a few positive tips about Instagram, one of the best for talking to consumers as there are no advertisements, and negative tips about other media. I taste one of Tim Graham’s work-in-progress dishes, caprese with a difference. It looks like a simple mozzarella but cut it open and it is filled with tomatoes. Magic. That word is so appropriate for this luxury hotel. I am leaving, quietly without fuss, but somehow the Guatemalan head butler, Carlos Carrera, appears in his morning suit, cravat and diamond neck pin, with a to-go bag. Pink, of course.