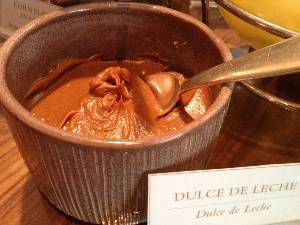 It is always essential, to get a flavour of a country, to try local dishes at breakfast.  In China this could be congee, in Japan steamed rice and miso soup, in Australia try vegemite and, separately, lamb chops (or used to be), in the South of the USA it could be grits, in the Netherlands cheese, in Germany hams and pumpernickel (and perhaps even beer), in Italy a fruit flan, and so on.

In Argentina they love dulce de leche, a kind of caramelised milk paste.  They spread it on buttered toast – later in the day, we saw it sandwiched between chocolate cookies as a yummy dessert.

At the amazing breakfast buffet at the luxury hotel that is Palacio Duhau – Park Hyatt Buenos Aires, there are small jars of it on tables as well as a big container on the serving table. The gal was tempted. 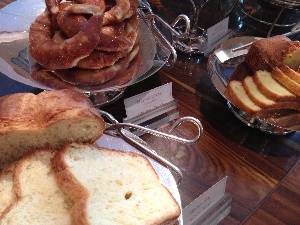 Brioche slices and other breads...

This is one of the best breakfast buffets of all time, partly because it is not too large.  Think also Twelve Apostles in Camps Bay, near Cape Town, and The Eden in Rome.  Their guests do not want to be drowned in too much stuff.

They also want the food to be beautifully presented, as in Cookbook Café at InterContinental Hotel London Park Lane, which uses a rustic table to display foods in wood containers.

Here at Gioia Restaurante & Terraces, in the new block of the hotel, the buffet has amazing fruits, yoghurts, cereals, brioche slices and brioche-buns with dried fruit.  The room attracts a clientele of local businessmen (where are the women at this hour?).  One man, in suit and tie, is meeting a couple of friends.  He laughs, almost nonstop. His happiness is infectious. 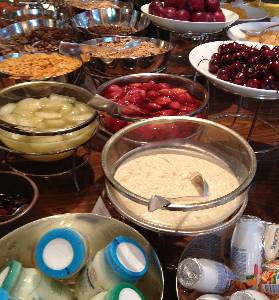 .. and local yoghurt pots and fruits

South America is the happiest continent on earth, said a reporter on the BBC the other day (he was talking about a Gallup poll, of whom and how many and where and when was not revealed, that said this is the happiest area, and the less happy destinations, as far as the population are concerned, include Azerbaijan and Singapore).

So here, in the restaurant, this guy’s cheerfulness spilled over and we all felt happy, too, especially since the food we were eating was so good.  It continued to be this way during my entire stay. 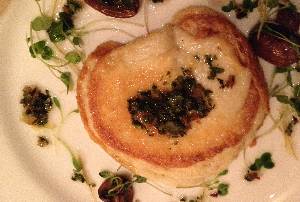 At dinner, in Duhau Restaurante & Vinoteca, named for the original owners of Palacio Duhau, the deep plum-coloured water tumblers matched the Murano chandeliers kind of stuck on to, rather than hanging down from, the ceiling.

This chimichurri, often just called chimi, is an amazing local thing, a concoction of chopped fresh parsley, oregano, garlic, olive oil, vinegar, and red pepper flakes and they put this on everything. 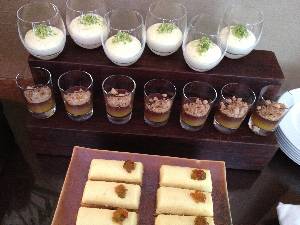 Even the butter ball served to my side plate in Duhau Restaurant comes with a chimi sprinkling.  I am amazed that the local wines chosen by sommelier Natalia Escudero are not chimi flavoured (she has selected a B Bohème sparkling, a Colome Torrontes from Salta and Angelica Zapata Malbec from Mendoza).

At another meal, back in Gioia, I watch local businessmen choose from main-meal buffets.  They love their desserts, especially an olive oil mousse.  It is really surprising that Argentinians do not get fat. They seem to spend hours and hours eatin’ and drinkin’ and just talking.

Go out of the Posadas entrance of Palacio Duhau – Park Hyatt Buenos Aires, turn right and 50 yards, on the other side of the road, is Patio Bullrich.  It looks quite innocuous outside but a line of about ten cars waiting patiently for the barrier to lift to allow one more into the car park is a clue. 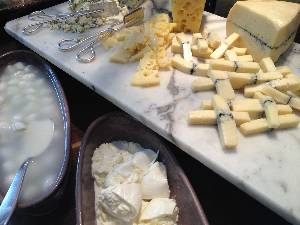 Cheeses often include a selection of mozzarellas

Inside Bullrich are four floors of luxury retail, anchored by the likes of Ferragamo. Each floor is cut away so, centrally, you can see up and down. There are dozens of coffee shops here, with seating spilling out into the walkways, and all seating is taken.

The gossip must be amazing.  There must be no secrets as everyone is networking.  Perhaps all this eatin’ and drinkin’ is compensated for by tango lessons.

And yes, the Palacio Duhau – Park Hyatt Buenos Aires even offers those, free for hotel guests.  This is a luxury hotel that knows that experiences matter, as well as food.