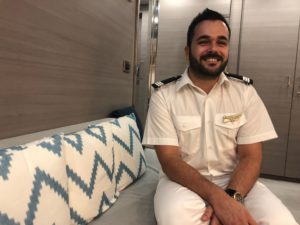 The food everywhere, in every restaurant on board Ponant’s Le Lyrial, was superb, and since the line is French it is safe to assume all 144 crew eat magnificently, too.  Officers are offered European, but in the main mess there are lots of Asian dishes to please the many Filipinos and Indonesians.  All sourcing is done at the beginning of a trip, in this case Rome, with some top-up of fresh produce along the way. Hotel Manager Sylvain Zurita, from Savoy, is a real foodie, who has worked at such place as The Brando in the Pacific. 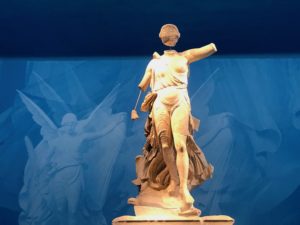 Here, on board Le Lyrial, all breads, apart from croissants and Danish, are fresh baked onboard. Butter is Bordier, who also provided the final night’s gargantuan cheese tables. Breakfast buffet fruits always had about ten choices, with blueberries one day, mango the next, and as well as good juice selections there was Henri Abelé Blanc de Blancs. To show how much Ponant cares for the foodie market, it has some big-names – French of course – on board a Gulf of Panama cruise starting 23 October 2019. The list includes Four Seasons George V Paris chef Christian Le Squer, plus global sommelier winner Philippe Faure-Brac and someone representing Restaurant Alain Ducasse at The Dorchester Collection’s Hôtel Plaza-Athenée, Paris. 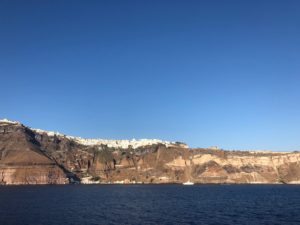 From the ship, looking up to Imerovigli, Santorini

Generally about 10% of passengers request special meals, but there was always so much choice.  As well as the sixth-deck buffets, inside or out, pool-side, you could breakfast or dine à la carte, on the second deck (I loved going down there for the ribeye, always available). Two quasi-formal nights, the Captain’s welcome and the Captain’s farewell, saw that à la carte switch to five-course set gourmet, which I avoided in favour of buffets. Main alcohol, say 2018 IGP Pays d’Oc La Tête D’Ailleurs, and Heineken, is included but you can pay €20 a day for Pass Premium, which allows unlimited consumption of pay-for alcohol, including Corona and fine blends chosen by whisky specialist Patrick Mahé. There were three bars, with the one on deck six doubling as the library that I sadly only discovered on the last day (it also has two computers, with a printer, but free WiFi in my cabin was generally, depending on satellite efficiency, excellent, as was Skype, most of the time). 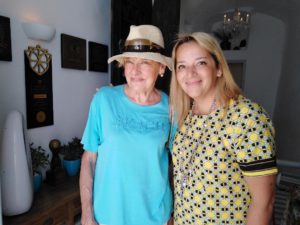 Ponant really looks after young travellers. The Kids Club onboard always seemed to be busy, and there were one-off events.  One day there was a cooking class in the main lounge – see above.  The ship spent a day in Katakolon, in Greece’s Peloponnese, so we could visit Olympia, where the Young Explorers took part in a relay race (one adult had to accompany their youngsters).  We other older folk learned that, to ancient Greeks, those that spoke another language were called barbarous. Greeks considered that a fit body meant a fit mind, kalokagathos, which led to excellence – kalokagathia is the ideal of gentlemanly. Behaviour. Olympia was one of four centres to hold games every four years and the winner was given an olive wreath by Nike: anyone who cheated had to pay for a lifesize bronze statue, to stand in line at the entrance to the Olympics, the statues called zanes. I loved the outstanding museum at Olympia, and also, among the ruins that extend over 134,647 acres, the remains of a hostel dating back to about 330 B.C. – and yes, even in those days there were two sizes of rooms. My new archaeological friends toured ruins day after day, inspired by our onboard archaeologist, the magnetic Dr Kathleen Lynch from the University of Cincinnati. I do admit I slipped off one day. Instead of touring Santorini’s Akrotiri I went for lunch at what must be that Cycladic island’s top luxury hotel, Iconic Santorini. Its Argentinian GM, Marcela Alfaya, runs an oasis of calm, high above the over-tourism down by the harbour, where boats bring day-visitors ashore from up to seven cruises ships at anchor every day. Personally, instead of waiting at least an hour for a cable car to take me a mere, but steep, 300 metres up to Imerovigli, I walked, 35 minutes’ up and 45 minutes’ down, always avoiding the mules who often seem out of control. WANT TO SEE THE KIDS’ COOKING CLASS?