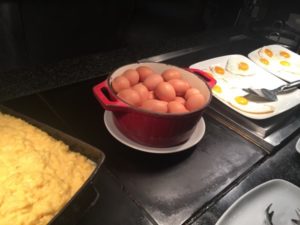 Finally, on this look at three niche sectors of travellers and what they consider luxury in hotels today, the gal tries an airport hotel. It really is a great asset, in this niche, actually to be connected to the terminal (Fairmont Vancouver Airport is actually IN the terminal, which is the biggest location advantage of all, of course). At London’s Gatwick Airport, the only hotel connected to the South Terminal is Hilton London Gatwick Airport, a mammoth 821-room bed factory that, says the gal, still knows how to do things with style. Ever since its 1981 opening it has provided the perfect pre-vacation overnight for those flying off to the sun of the Caribbean, or wherever, and many business people know they can stay here and get to meetings in the Victoria area of London in under 40 minutes, by Gatwick Express train. 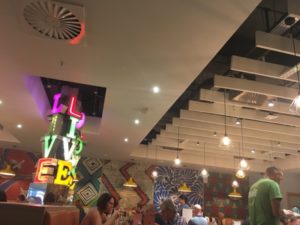 I really like the hotel’s club product. The lounge, on the fourth floor, has lively goldfish swimming in a two-way window, and such cheerful supervisors as Cinzia Damico and Zsofia Jaszovics, who has been here eight years which shows she must love the place. Stay in a club room and cocktail hour includes Ayrum wines from Spain, an Airén white and a Tempranillo-Garnache red, and the food is copious enough to be able to make a whole meal, if you want. But there are proper restaurants here, an à la carte for those who want a formal dinner, and buffet for more speed, and some go over to the terminal, which gives a good ten-minute exercise as you walk over (my choice for healthy food in the terminal would probably be J.D. Wetherspoon’s superfood chia and quinoa salad rather than the equivalent in Boparan Finance-owned Giraffe, just opposite – this has atmosphere but its salad is paltry). 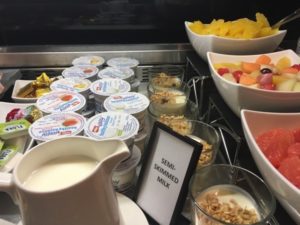 The sleep experience at Hilton London Gatwick Airport is great, especially if you face the terminal or, as in the case of 7403, over a spacious carpark – see the video below. I also like this room as it is a few yards from the outside fire staircase. Go up and down it ten times, 78 steps top to bottom, and you have done 1,560 steps, which saves the time involved in going to the hotel’s 24/7 gym, although you would miss its new Precor equipment. Stay in a club room and you can breakfast, from 6 a.m, in the club lounge or, from 5.30 a.m. in the buffet Garden Restaurant, which is really cleverly thought out. Hot beverages are brought to you, in individual thermal pots, and the three buffet stations are big enough and well labelled so there is minimal congestion. I like the way butters and jams are displayed, as above, and the freshy fried eggs. 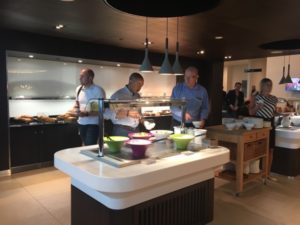 People about to fly off do not want to waste time – luxury, for them, is having what they want and when they want it, both in the hotel experience and in the entire travel journey. Now that British Airways has moved its entire Gatwick operation from the airport’s North Terminal to the South Terminal, this has brought a lot more British Airways’ business to this hotel. After my breakfast, I checked out and walked back to the terminal and, having taken a necessary signposted meander through the inevitable and hated duty-free, found the new British Airways lounges. Breakfast there looked absolutely excellent, both in the Club lounge and, from 7 a.m. when it opens, in the First lounge.