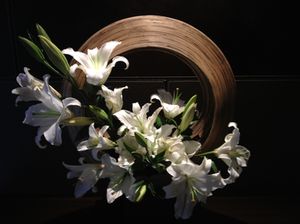 Flowers on a corridor

Flowers have been put on the map by many luxury hotels.  Four Seasons in Los Angeles – which was originally going to be some three-star property – opened to great acclaim in 1987 partly because of its amazing lobby floral arrangements. Well, the place was, and is still partly, owned by the Cohen family, into flowers in a big way. And thinking of the Beverly Hills homes and their owners’ love of blooms, that must be pretty good business.  Leela Gurgaon is also into flowers, in the form of at least 50 white lily decorations on its six floors of bedrooms. The gal asked the housekeeper how many ‘hundreds’ had to be arranged every day but apparently, she was told, these particular flowers last at least three days. 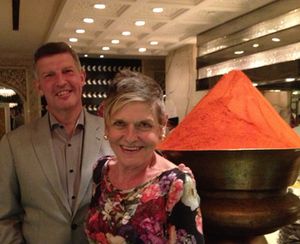 The guy running this hotel (322 bedrooms and 90 serviced apartments) is also into flowers.  Michel Koopman was standing on the steps in welcome, holding a large bouquet of lilies.  These were, however, pink, which showed he had not just snatched the contents of one of the housekeeper’s arrangements.  In honour of the floral theme, I thought I should wear my flower frock to dinner. As those who know me know, I generally only have one frock-on-the-go at any one time. Saves a lot of time.  No more ‘what shall I wear?’ 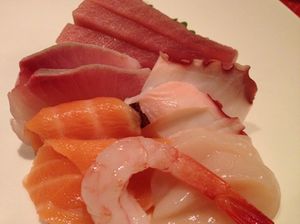 Any time-saving trick means extra precious minutes for conversation and other pastimes. One reason I love sashimi so much is that all one needs to do is pick up each bite in one’s chopsticks.  The sashimi here comes from fish flown in from Tokyo’s Tsukiji market (it comes with the fish for Megu at this Leela’s sister hotel, Leela Palace in central Delhi).  Spectra has 250 seats and six cooking areas, offering Arabic, Indian, Japanese and international. Over 650 eat here at some point of every day. 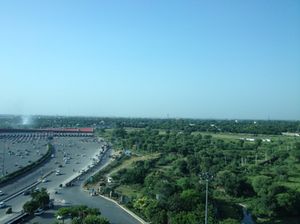 View down to the highway

The hotel also has a rooftop restaurant, Zanotta, that is purely Italian.  It is called Ruby & Pearl for short, not because of its ruby-coloured chairs and white linens but because they, in turn, are chosen because of traffic lights outside.  Yes, the hotel looks right down at the massive toll station of the airport artery on the Haryana NH8 highway.  Day in day out you see vehicles to your left that are temporarily stationery, waiting to go through the toll booths, while those on the right filter through gradually, after the booth. At night, this means you have a fabulous light show of reds to the left, white on the right.  Ruby and pearl.  What other fine dining place makes traffic into a decorative theme?  Either side of the highway you look at Rajokri roughland. 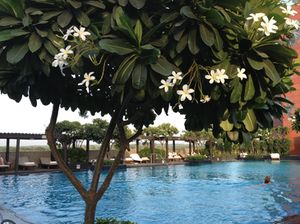 I am sure there are flowers somewhere amid that roughland but cannot see’em from up here in my sixth floor suite. I am at the round end of a building that is a long rectangle with one round end.  For best views and size, go for that round end – on the sixth floor it is 611.  This is also handy for the club lounge, at the other end of the rectangle There are flowers in there, of course, as there are on top of the embroidered runner that decoratively lies on top of the massage bed. I have a neck and back massage, Pevonia Botanica – more flowers, at least in the name.  I go out to the pool, with flowering frangipane trees around. 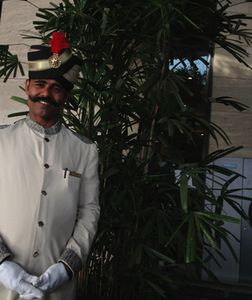 Many of the taxis seem to have orange garlands, fresh blooms, tied on their fronts. I go out into my waiting car and the doorman, fortunately, is not wearing flowers. He sports an enormous grin to match the moustache that seems, with physical height, to be de rigueur for Indian doormen.  No flowers here, but at least there is a big green plant.