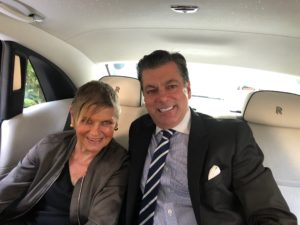 Sometimes the gal has so many experiences in a really short time that it is hard to keep up.  Take a quick lunch at Culina in Four Seasons Hotel Los Angeles at Beverly Hills. First, the hotel’s creative GM Michael Newcombe arranged a personal pick-up, in a Rolls-Royce. Next, on arrival at the hotel there was its owner, Robert Cohen (above, with Michael Newcombe), whose life had always involved supplying flowers to Hollywood’s rich and famous.  He planned this 285-room hotel as a Méridien, but it opened in 1987 as Four Seasons and has been a leader ever since. RC, as he is called, was waiting for a meal-to-go, to eat in his personal Rolls as he was driven home, but Michael Newcombe had sit-at-table in mind. 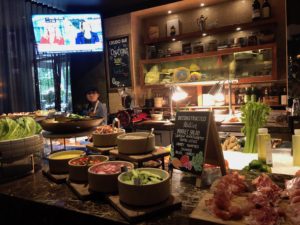 Cleverly, Culina has a bijou bar-counter buffet section, Pronto, which is just great for decision-makers in a hurry. The $35 help-yourself, with your choice of protein, was hard to resist.  I was, however, attracted by such à la carte dishes as wellness desserts designed by a plant-based – vegan – celebrity chef, Matthew Kenney.  Here you could have a chocolate and avocado mousse with a vegan brownie and avocado ice cream, total 295 calories.  Plant-based is in, says Matthew Kenney.  Here, Michael Newcombe says about 25% of customers choose at least one plant-based dish. And then the conversation switched back to flowers.  Guess what, Jeff Leatham is back, said Michael Newcombe. 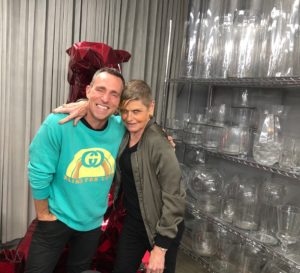 Jeff Leatham’s fame with flowers began here; then he was loaned to Paris for the 1999 re-opening of Four Seasons George V and thereafter was based in the French capital.  Now he is back here, working out of a large studio in the hotel (you can host small parties there, apparently).  He rushed into his cold store for a gardenia for me but gave me a two-shade purple rose, instead.. oh how lovely to catch up with him.  But there was more in store.  Michael Newcombe also heads Four Seasons’ spas and wellness worldwide and he wanted me to see the first four of what will eventually be 20 spa rooms here in the hotel. The one I saw – see the video below – was indeed soothing, calming, and unfussy.  The designer is Four Seasons’ own Dana Kalczak. Michael Newcombe expects at least a $30 surcharge for these rooms. 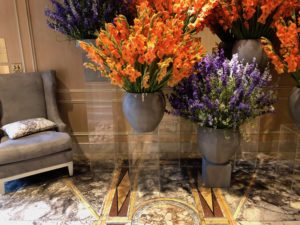 And an elevator lobby artwork

His partners in his mission for Four Seasons to lead the luxury hotel industry when it comes to wellness are global household names, and I respect not being able to reveal who they are yet.  What I can say is, expect Four Seasons to move spas and wellness from an ‘amenity’ to a core of the brand, involving four pillars of exercise, mindfulness, nutrition and sleep.  As we walked around the hotel’s pool and looked at its outdoor gym – oh so rare, and so lovely in this weather – Michael Newcombe pointed out that he sees luxury today moving to some degree from being connected to being de-connected.  He did share that his planned calendar of activities includes guided meditation. NOW SEE FIRST JEFF LEATHAM’S STUDIO AND THEN A SPA BEDROOM