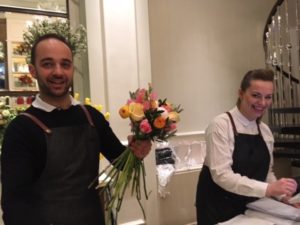 Oh what a difference flowers make in a luxury hotel. Four Seasons George V Paris knew that when it reopened in 1999, and its then-florist Jeff Leatham, who is still creative director of everything and anything artistic in that lovely theatre, made his name by creating arrangements of parallel flowers, at angles, into big glass vases. By contrast, flowers at Corinthia Hotel London are invariably a multi-coloured presentation of living pointillism. Look at the close-up, above, of one of the hundreds of vases in public places around the hotel right now. All displays are done, says the gal, at the hotel’s own inhouse boutique, By Appointment Only Design. 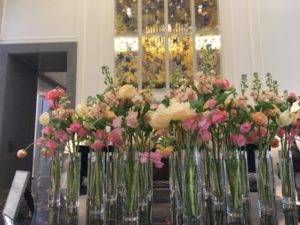 This is a company run by former fashion designer Javier Salvador who somehow got diverted into wedding flowers, and the work that he and his colleagues do is just so beautiful it is almost worth getting married again…. ha ha. But the beauty to be seen in this hotel always makes me smile. The Corinthia beat all expectations, by the way. When it opened in 2011 no-one except the owners and their GM, the brilliant Matthew Dixon, thought it would ‘work’. Now it has seen off all the sceptics, and is a magnet for business and leisure, for spa goers and for the entertainment crowd. Its entire sixth floor is wired for in-suite recordings, including television interviews. 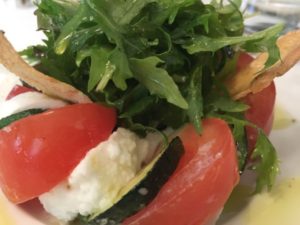 It is also a setting of location shooting for Red Sparrow, director Francis Lawrence, of Hunger Games, a spy thriller movie starring Jennifer Lawrence and Joely Richardson, among others – and due for November 2017 release. The plot involves a sexy Russian spy falling for a CIA officer and considering turning into a double agent. Apparently it is quite obvious that much of what sounds to be a highly colourful film is shot here, at Corinthia Hotel London, which will put it even further on the international map. There is, by the way, masses of colour throughout this hotel, and not only when it comes to flowers. I lunched in Massimo, the Italian restaurant, with my friend Trevor Owen, and look at my two dishes. 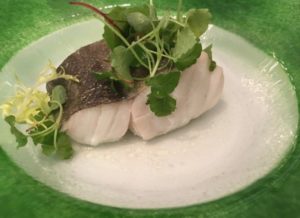 Both the caprese and the cod, on its green glass plate, were full of colour – and taste. As I left this luxury hotel, I wonder what Mr Gordon, who commissioned the original hotel, then Hotel Metropole, which opened here in 1885, would have thought. Actually he sounds to have been pretty colourful himself: in 1886 he organised the first London to Brighton motor car rally, which started here. Later, from 1936 through to 2006, this became an intelligence building for the UK’s Ministry of Defence, which makes the shooting of Red Sparrow all the more appropriate.