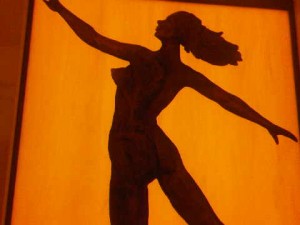 Sunday morning. Keeping fit in Shanghai is actually a cinch – and also essential.  The bodies around the gal are beautiful. Look not only at the designer boutiques (the Miu Miu, created by Miuccia Prada, and Tom Ford, created by himself, and many more outside Portman Ritz-Carlton) but also at their customers.

It was a necessity to keep up with Mius and Fords and head over to Four Seasons Hotel Shanghai, on Weihei Road on the Puxi (pushy) side of the river. This luxury hotel is a ten-year veteran, running like clockwork. The spa, on the sixth floor, is a just-born offspring.

Enter this Hirsch Bedner space and you think you are in hundred-year old palace. First, you go through a ceiling-high door of lacquered aged wood. Next you progress over flooring of polished and beveled black granite slabs, about five by three feet. 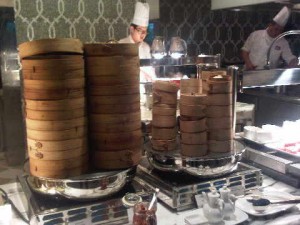 It is called Qin The Spa, to assimilate, to become part of the design and culture. Each of the nine rooms is  unique, though all have rich interiors featuring the I Ching trigram, namely eight symbols in a hexagonal shape which, apparently, signifies the eight defining phenomena of the universe, namely sky, earth, thunder, wind, water (moon), fire (sun), mountain and lake.

In hushed tones, Fiona led me through to a room that was dark, highlighted by the soft green and cream of cushions, and the cashmere-feel throw on the table. Music was soothing, her strokes were soft.  Such is Futuresse’s promise, that a First Temptation of Lotus lifting treatment guarantees reduction of fine lines, so after an hour’s sleep one did need a magnifying glass to see any lines.

Some of the lovely older people in Shanghai, by the way – they who have seen so much in their lifetimes – have almost line-less faces.  Do you think they do dim sum at breakfast? 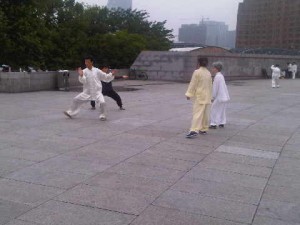 Many of the locals keep lines away by regular tai chi. There is gathering of them, early every day, on The Bund, especially at the north end by the Memorial Tower to the People’s Heroes.

These lovely ageless people assemble in their appropriate gear – top dogs seem to favour loose white satin pyjamas (I have kept off satin, myself, ever since I was given pink satin sheets to sleep between in the presidential suite of a hotel which must remain nameless).

I was taught tai chi by Henk Bosch when he was at the Excelsior in Hong Kong many years ago, and it is lovely to see how many hotels now offer it. At InterContinental Hong Kong do it poolside, looking across the harbour to Hong Kong Island: here at Park Hyatt Shanghai, do it up on the 85th floor Water’s Edge fitness area.

Tai chi means ‘supreme ultimate fist’ and there are five traditional schools of study, all of which maintain that focusing the mind on your movements gives it greater clarity.  Apparently you are supposed to wear flat shoes. Wonder how those skyscraper-heel wearers in Azerbaijan and Russia manage, who wear their Louboutins even to buggy the baby over rough cobblestones? 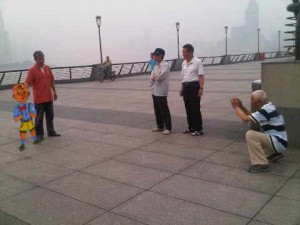 Old men on The Bund admiring a new-style kite, specially for UEFA 2012

But there are others keeping fit on The Bund by flying kites, a tradition that goes back for ever.  Weifang, in Shandong Peninsula, halfway between Jinan and Qingdao, claims to be the capital of kites, and since 1984 it hosts an annual international kite festival, said to be the world’s largest.

Here on The Bund, however, they have some of the world’s largest kites.  Watch really old men arrive, put their kites together, get them up there… communing with the heaven.  Many of the kites are bird-shaped but today, in honour of the European football champions, one guy has brought along a footballer kite.

The word ‘bund’ by the way means embankment, and whereas there are many ‘bunds’ in India and Japan as well as China, this is the one and only The Bund, rhyming with ‘fund’.

It is a mile in length, lined by 58 fabulous buildings, from the Asia Building at No. 1 on to the Shanghai Club (now the sensational Waldorf Astoria on The Bund Shanghai) and so on. No 3, the former Union Building, had a Michael Graves’ interior re-do, with central atrium forced upon it, and it has galleries, shops and restaurants, including one of the world’s only two – known to me, at least – two-person restaurants.  Three on The Bund, as it is now called, also has the world’s first Evian spa. 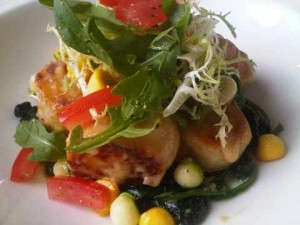 No 20 The Bund, once the Sassoon House, is now the Fairmont Peace Hotel. The other night its public areas were heaving with over a thousand party-goers from the International Luxury Travel Market ILTM. Now its glorious 1926 octagonal lobby is peace and calm. Staff flit around in Art Deco uniforms specially designed by Anthony Xavier Edwards of X Style, who lives in Sanya but has a boutique here in the hotel.

Up in the ninth floor Cathay Room, we look at the just-opened outdoor terrace, with spectacular views along The Bund, but decide it is a little windy to try the new wicker seating.  Inside, chef Trevor McLeod, who was formerly in Abu Dhabi, does not mind a bit when I de-meat one of his suggestions, and end up with an ultra-healthy gnocchi and vegetable dish. Kamal Naamani, a Lebanese-Canadian who started out studying design, says it was he who created that party.

Now his creations include Dine With A Star. As well as its main terrace, the Cathay Room has a cantilevered projection over The Bund itself that is just big enough for a table for two (aha, another restaurant-for-two). Dine With A Star will be auctioned for one person to dine with a stated star, the income going to that star’s charity. 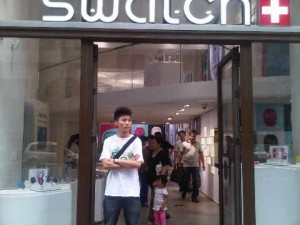 The Swatch shop, for emergency repairs (and first-class customer service)

Talking of charity, I have only seen one person begging in my nearly-two-weeks in Beijing and Shanghai, and that was a well-dressed one-legged man on a crutch on Nanjing Road here. Compare that with the number one encounters in the current Olympics venue (especially the sordid underpass you need to take to get across Hyde Park Corner).

Anyway, after lunch I popped literally over the road from Fairmont Peace to the Swatch shop on the ground floor of the Swatch Art Peace building. Swatch has a weakness when it comes to watch buckles. They break. But it gets ten out of ten for customer service.  Head into any Swatch store and they fit a new buckle, free. In and out in under two minutes flat. 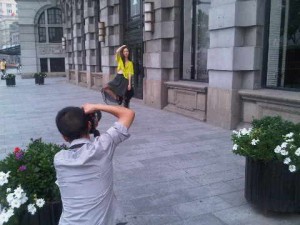 Armani store, on The Bund

That leaves extra minutes for yet more keeping fit in Shanghai.  Perhaps a bike tour, gal?  No, let us take a further hike along The Bund. Outside the Armani store a model is being photographed, and watched by the curious.

She is one of the reed-like sultries I saw on my arrival at Beijing Capital airport all those moons ago.  Perhaps China is not such a vast country after all.