After the surprise proposal, at sea, the newly-engaged have chocolate and strawberry massages

Want the ultimate proposal that will lead to a memorable wedding?  How about this, gal?  A man contacts Shanti Maurice, on the south coast of the beautiful island of Mauritius, ahead of time, for a Royal Occasion.   The day starts – as it has done for five European couples in the past few months – with a round of golf, for two.

The woman thinks this is lots of fun.  Her nerve endings get even more electric when the pair are then driven, under police escort with not one but two flashing lights, to the nearby helicopter landing pad for an hour-long ‘chopper’ tour of the island.

Next they board a 47-foot catamaran – Liz Hurley swimwear miraculously appears, because of course she, at least, is not equipped.  They sail out to sea, swim in the turquoise Indian Ocean, and he pulls a wedding ring out of a convenient pocket to propose.  It is underwater but a photographer, in diving gear, has – also miraculously – appeared.

Next comes a chocolate and strawberry spa treatment for two, with Cristal champagne for drinking not dousing.  Do they want to get married now, in a few hours?  So far, in all cases the answer is a big Yes.  Forget about relations back home. We Are Getting Married.  Everything is laid on. 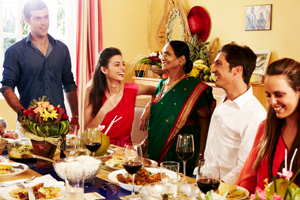 The 51-room Shanti Maurice is an oodles-of-fun Leading Hotel.  Stay here anytime and you can visit Grandma.  Once a week Grandma Gondoo, 1936 vintage and married at 13, entertains at her own home.  The ten-maximum group of hotel guests who book her dinner is always sell-out.

She may cook her Palm heart salad, Fried liver with onions, Barbecued lamb with peppers and onions, Creole-style sautéed pumpkin, Grated green banana fricassee and so on – and later you can try the same as all her recipes are in Grandma’s Secret Recipes, The Art of Mauritian Home Cooking by one of her grandsons, Nitesh Pandey, who is F&B director of the Shanti Maurice luxury resort.

I love the chapter on Grandma’s secret tips.  I know now that green herbs freeze well and keep good flavour and colour but after thawing they will be too soft to use a a garnish, and that the flavour of cumin powder is brought out after heating, and sprinkling lemon juice on just-cut fruit prevents discoloration. 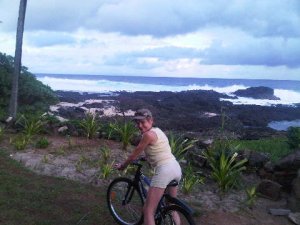 The book, and the concept, won World Hospitality Awards 2001 Best Initiative in Client Experience Award, and to celebrate Shanti Maurice, with Grandma, cooked in London.  What a thrill!  Grandma is, by the way, also grandma to Rimala, PA to Duarte Correis, Acting GM of the hotel.

Duarte  is hilarious, a ball of fire who comes from two families of bakers, one on Madeira and the other in Venezuela (and yes, he loves his food).  He broke away from family tradition to study English in London, started waiting tables and got hooked.

After working in Vietnam he made a zigzag journey via London (during the volcanic ash debacle of April 2010) to get to Mauritius, where he bubbles with infectious enthusiasm. 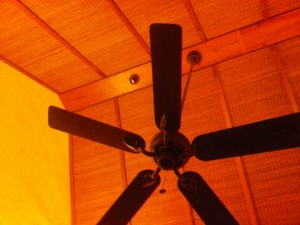 His guest stay about nine nights, and he greets them and writes personal notes to them all, and the same on departure.  He titillates at Christmas with, for instance, his 2011 package based around a cartoon book of the extinct dodo, national bird of Mauritius (no, he does not know what he will do this Christmas).

The boutique here has lots of goodies to take home and soon will have silver bits from Patrick Mavros, the Harare-based super-jeweller whose workshop I visited when I was in Zimbabwe last year (international aficionados will recognize the typical Mavros piece, say a ten-inch long all-silver pheasant with each feather clearly defined, because one unique piece sits atop each table at Mosimann’s Club in London).

Forbes Mavros, one of Patrick’s four sons, lives on Mauritius, hence the connection with Shanti Maurice.  Of course there are others who come here, any time, for the health side.  The spa has two Ayurvedic doctors, and offers full detox and rejuvenation programmes, plus Africology all-natural treatments. The signatures are an 80-minute Devi anti-aging facial, with a Balinese therapists, to a 60 (or 90) minute Sega ritual with full-body scrub, spray and massage to release blocked energy flow. 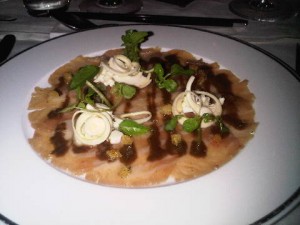 Many like the Unlimited Spa offerings, book time and then decide, at that hour, what they actually want. To keep fit, there are tennis courts, jogging tracks, Raleigh bikes and horseback riding, snooker and, of course, the ocean – Shanti Maurice is near St Félix on the south-west coast of Mauritius.

Villa 216, at the far side of what looks like a football field, has its own 25-foot infinity pool, ideal for a late-night private dip.  The villa is cool and calm, with a high cathedral ceiling formed of rattan panels. Cream marble floors and cream walls and full-height curtains go with mid-brown wood furnishings, and such essentials as Samsung LED screens, inroom and at the foot of the bathtub (open to the bedroom, though a blind can be pulled down.

You have Plantation organic toiletries and both indoor and outdoor showers. The minibar has Veuve Clicquot champagne though to healthy Tao drinks, say one that includes ginger,cardamom, passiflora and vitamins, and there is a Nespresso machine.

We dined at STARS, where you can sit on the outdoor terrace or inside, watching Austrian chef Willi (Willibald Reinbacher, formerly with Jumeirah in Dubai) and his colleagues at work.  Flatbreads and grissini come with three dips (the home-made pesto, using own-farmed basil, is divine). 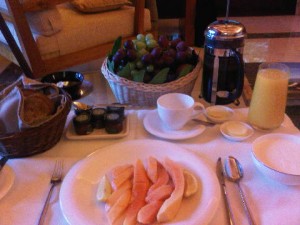 I was tempted by bobotie from the South African dishes on the menu, but went with a starter of Marlin carpaccio topped with hearts of palm, and olive and lemon basil emulsion, followed by Grilled tuna mi-cuit in a puddle of confit onion, bacon and saffron velouté, with three halves of cherry tomato. The Pinot Noir, made by Anthony Hamilton Russell in Hermanus, South Africa, was carefully poured into Zwiesel glasses with some of the tallest stems in the wine world.

The tempting desserts included a Rodrigues-lemon curd pie with tart lemon sorbet.   In the morning, after a dawn swim’n’cycle, breakfast tempts.  The doorbell rings at exactly the stated hour, and the waiter exactly sets up what I have ordered…. I could bathe in Shanti Maurice‘s home-made yoghurt it is so good.