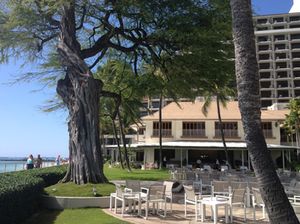 A tree, a plantation house (with high-rise behind), public walkway to the left – this is Halekulani

When is a hotel a hotel and when is it a resort? The amazing Halekulani, Honolulu, is everything.  Take this image, says the gal, and it sums up the establishment.  The tree is one of several that are way over a century old, so yes, the place has history (it goes back to 1907 when a merchant, Robert Lewers, built a residential hotel called Hau Tree).  It is right by the ocean, so it is a resort (you can see non-hotel guests walking along the public pathway between the beach and the hotel).  At the same time it has the centre of Waikiki outside its front door, so it is a city hotel…  This image also shows the two-floor plantation house, of which more anon, that is flanked, as it were, by two soaring, 17-floor buildings, both at right angles to the sea. 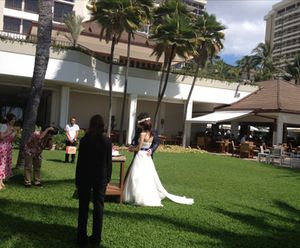 One of many weddings, by that tree

This is the hotel that is a focal point not only for its guests but also for those who live in town, and some who visit but stay elsewhere.  During one afternoon I saw three weddings. One was holding the ceremony on the lawn by the tree already shown.  Another, in this picture, was undoubtedly a couple who had married elsewhere but decided to have their official photos taken here.  They commission a wedding cake, which they ceremoniously cut, and they might or might not have a meal, but the everlasting Photos Of Happiness show the Halekulani.  This is, after all, the ‘house befitting heaven’, which is what Halekulani means – the name was changed when the place was bought by Cifford and Juliet Kimball in 1917. 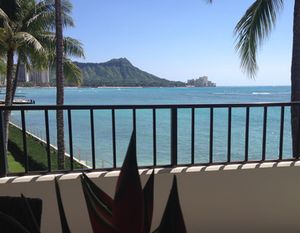 View from the Halekulani Suite, looking to Diamond Head

One of the iconic, as well as Leading, hotels of the world, the whole five-acre complex has been owned since 1981 by Mitsui Fudosan, who also own The Imperial in Tokyo. Halekulani was once Regent, for a full 90 days, but now it is brilliantly independent.  It may have 455 rooms, and 800 employees, but, says hotel GM Ulrich Krauer, it is run as a small hotel.  Someone the staff you deal with know you and, you think, only you.  Mark put a lei round my neck and showed me up to the Halekulani Suite.  Look out across one of its big balconies, sorry, lanais, and you see far eastward to Diamond Head.  In between, the water, from sunrise to sunset, is dotted with surfers, paddle boats, tiny boats and bigger catamarans. 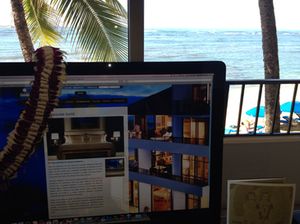 And looking past the suite’s enormous Mac, to the ocean

This 210 sq m suite was named for Vera Wang for six years, and some of her attributes still remain – though I did not get a personally welcome note from her, as in the past (but I got more than better notes from others, for which thanks everyone).  Vera Wang must have insisted on a Chinese desk so tall that her petite self could only have used it when standing.  Did she also choose the 27-in Mac that it holds?  Actually, let me share a secret.  I decamped my office to the enormous bathroom, where the right-height mirrored table, which had a socket by it, made a perfect desk. 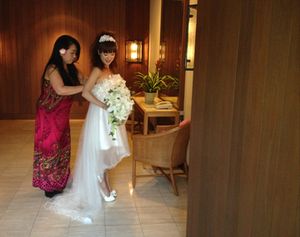 Getting ready for a(nother) wedding

I had a busy time.  Sent laundry, which came back on new white plastic hangers with foam protectors, the whole caboodle in a white, hotel-logo garment bag with my original ‘sent’ list in its clear plastic pocket.  Went to spa. Divine. Any treatment here, whatever, starts with a footbath.  Your feet are then wrapped in mid-brown shot silk that matches the therapist’s pyjama-type trousers, and she gently bashes said feet with a broom made of twigs tied together.  After that the treatment, any treatment, is divine and you are offered icecream on a delicate China plate before you leave.  On my way back, saw yet another bride, this one staying in the hotel.  Wished her luck. 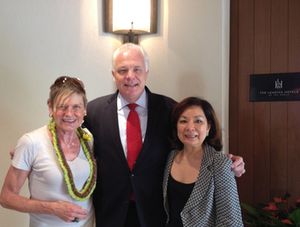 Coincided with Ulrich Krauer, and a predecessor GM, Patricia Tam, who is now in corporate office (Halekulani also owns the trendy-design Waikiki Parc, just across the street, and both hotels’ guests can sign at its Nobu). Ran into old friends, including Shanghai phenomenon Yue-sai Kan, here to talk about the Shanghai Film Festival, which she runs – it partners with the Honolulu Film Festival, which Halekulani sponsors. Ran into Tetsuya Kobayashi, newly-elevated Chairman of The Imperial Tokyo. Yes, you meet the world’s top people here at this luxury hotel. Had time to work out, had time to eat, lots, which is another story…