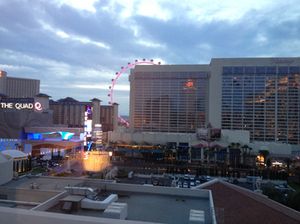 And now, another day, another place, immediately identified by this image. It can only be The Strip, Las Vegas’ famous length of Las Vegas Boulevard, with such iconic luxury casino hotels as Mandalay Bay and Four Seasons to the south end, and Wynn and Encore to the far north. This is the view from room 8006 of Nobu Hotel Caesars Palace, Las Vegas. Nobu, asks the gal? Surely that is restaurant territory? 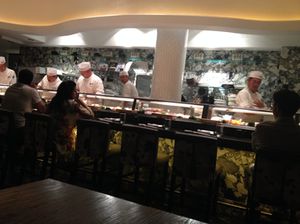 Greeted by the chefs

Yes indeed it is. Nobu Matsuhisa and his partners, Robert De Niro and Meir Teper, have 28 restaurants around the world. Some say that they felt they were helping others’ hotels by doing top-grossing restaurants in them. It is also known that Robert De Niro, who had already invested in several hotels, thought why not a Nobu hotel? There is already a Nobu restaurant in Vegas, at the Hard Rock. A second restaurant was needed so, hey presto, Caesars turned a retail outlet into a 327-seat Nobu restaurant, opening on to casino territory. It opens at 11.30 am and as with all Nobu restaurants, it is a wildfire success. 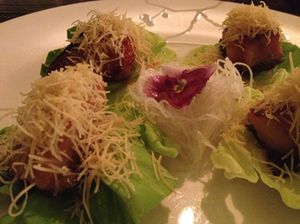 Move across from casino-land into cuisine territory and you are greeted with a chorus from all the chefs of ‘irasshaimase, konichiwa’, please come in and how are you? The tables are deliberately rough wood. The atmosphere is nicely, but not too, noisy. You can get your traditional or new-style – that is to say marinated – sashimi, and yakimono from the grill, kushiyaki skewers and so much more. I have an artichoke salad, a small mountain of julienne of artichoke with various Japanese flavours. We nibbled on edamame beans (how did diners manage before these became hot-stuff?). I go on to an old favourite, black miso cod, here served in bite sizes, with lettuce. 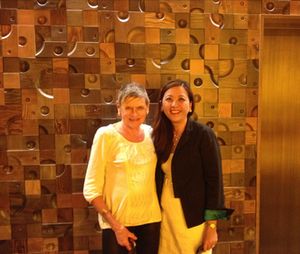 Gigi Vega, in front of a wall of wood blocks

I am with Gigi Vega, whom I first met in Macau. She was majoring in Advertising at Manila University when she met her husband and now, 25 years later, the happy couple have been travelling round the world, so to speak, with their three kids. We talk about women in hospitality. When she is at work she is the leader. But when she gets home she believes in taking off that professional hat, with humility. But tomorrow she will once again be here, as GM of this luxury hotel, the first in what will be a select portfolio of Nobu hotels….