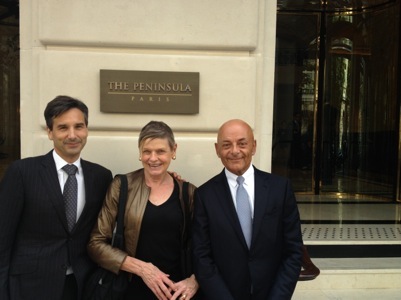 People have been raving about The Peninsula Paris ever since it opened August 1st, 2014 – a connoisseur par excellence who was there the very first day declared it to be très bien (in France you never exaggerate), and later a 16-year old male sceptic gave it a suitably Italian operatic-aria assessment. The gal had to see this luxury hotel for herself. She never dreamed that she would be greeted not only by the GM, Nicolas Béliard, but by the COO of The Peninsula group, the increasingly pop-up-everywhere Peter Borer. 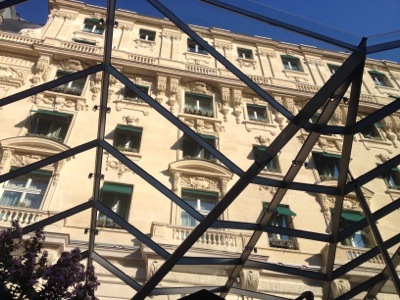 Look up, through the new glass canopy

There has been a building here, at the junction of avenue Kléber and rue Jean Girardoux, since 1908, when this was the Majestic Hotel. Its main high-ceiling ground-floor public rooms have been retained, the rest rebuilt and extended. Now, from avenue Kléber, you look up through a giant, origami-style glass and steel ‘umbrella’, a canopy protecting an outer terrace – reach this, from the street, up seven grey-carpeted steps flanked by two stone lions, in Chinese style. The architect today is Richard Martinet, the interiors are Henry Leung. The hotel is jointly owned by Qatar, which has 80 percent, and by The Peninsula’s owners, who have the other 20 percent. 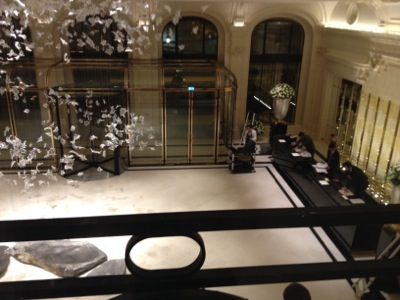 The main lobby, reached direct from rue Jean Girardoux, is a two-floor-high space, marble and glass, and white paint and stunning white flowers in tall silver urns atop six-foot plinths. Look down through a first-floor inner window and you see some of the 800 clear crystal or gold flying-fish shapes, suspended from the ceiling (like all the modern chandeliers here, they are from my old friends Lasvit in the Czech Republic). Apparently there was a fear some visitors might bump into the flying fish so Peter Borer brought back three giant rocks from Bhutan. They are here, on the floor, and, guess what, someone bumped into them in the first week. 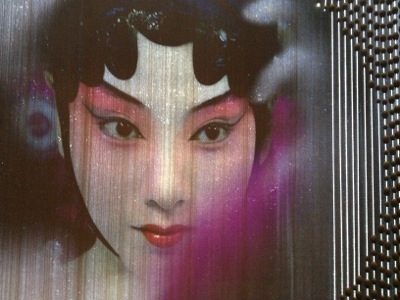 Looking along the gallery to Lili, on the far end wall

One unexpected challenge is that the hotel has been full since day one. All 200 bedrooms are taken, and I, for one (suite 318) adored the understated colours, the easy-work tablet and the much-vaunted personalised labels, which mean all signage, say for drapes, outside awnings and lights, is in YOUR language – 11 languages are available, programmed by front desk when you check in. I also love having a free mini-bar, with big-sized waters and juices. Public areas are, well, busy (it is quite true that you need to reserve a restaurant table three weeks ahead). Everyone wants to come and see – and IS it true that LVMH boss Bernard Arnault nearly coincided with the red and black striped-hair Stephen Hung? Hung,  currently spending $800 million on the 230-room Louis XIII hotel in Macau, was in Paris on his way to Goodwood, in England, to sign the biggest-ever Rolls-Royce purchase, namely 30 bespoke extended-wheelbase Phantoms (two gold-plated, all with Graff diamond-encrusted interior clocks). Back to Paris. This luxury hotel is just so addictive. Walk along the 100-yard marbled gallery from the main lobby, past designer vitrines and a Hobbs store, to the 12-foot fibre-optic curtain that announces LiLi, a new take on a Shanghai-meets-Paris restaurant of the 1930s. You just want to go in…