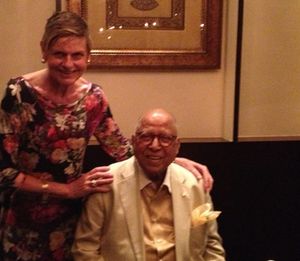 This young man is one of the legends of luxury hotels, Capt C.P. Krishnan Nair, Founder and Chairman Emeritus of Leela Palaces – Hotels – Resorts.  At 91, he will get his first-ever Honorary Doctorate, for Humanity of Letters, on September 30th, 2013, at Jodhpur National University – another honoree will be his good friend and another legend, this time of Bollywood, Amitabh Bachchan, 70, whom Eastern Eye’s July 2013 poll of British Asian movie-goers decreed the greatest actor of all time.  The Captain has already been awarded India’s highest honour, by the way: he is, says the gal, a Padma Bhushan. 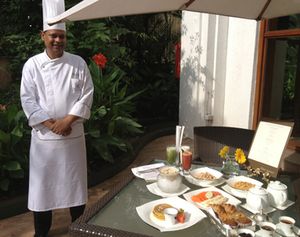 From the moment he opened his first hotel, The Leela Mumbai, in 1985, he has been strongly into green. Even former slums around the hotel have been transformed with neat hedges, all immaculately trimmed by some of the 427-room hotel’s 65 gardeners. This morning, after a royal dinner last night with the Captain, the chef has proposed an organic breakfast, poolside in the garden. There are juices – Pomegranate, carrot and mint; Cucumber, honey and basil; Papaya or Tomato; and a Banana and brown rice smoothie. There is Banana and papaya fruit. Baked offerings are Carrot and raisin muffins, Dried fruit cake, Wholewheat brown or white toast, and amazingly light Organic croissants (what makes them all organic is not revealed but I trust the Leela chefs). 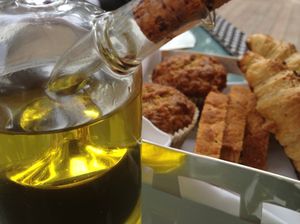 Choices also include Cornflakes with flax, Cracked wheat muesli with almond. Quinoa pancake with honey and crushed grain sugar, and Omelette with potato rösti and basil-flavoured tomatoes.  For me, they bring a perfect egg white omelette with olive oil on the side. Having just read that Brazil’s best, namely Gisele Bundchen, worth, with her husband Tom Brady, a mere $80 million, has at least a tablespoon of olive oil with her lunch and dinner food. If it is good enough to oil that body it is good enough for me… The oil sparkles in the morning sun.  Nearby, people are removing the last traces of stray leaves from the big curvilinear pool. 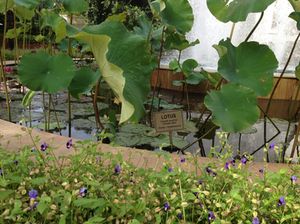 I look round part of the garden with Ashish Kumar Rai, the hotel’s GM.  He actually started here, straight from college, and every morning it was one of his duties to take Capt. Nair on that constitutional.  The older man wanted the younger man to learn his plants, and seconded him to garden duties for a week (it has been so SO helpful, admits the now-GM).  Some of the species, like the lotus behind these long-legged pansies, are labelled. 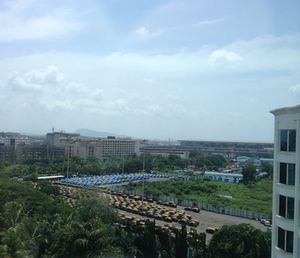 View down from room 805 (note taxis to right)

At the hotel, garden-facing rooms are the favourites, and any with entrance to the top, eighth, floor Royal Club are especially preferred.  I look down from 805, the premium Maharaja Suite.  In one direction I see only the hotel’s garden, with big curvilinear pool.  Turning to my right, I see an adjacent cab park, on hold for the airport.  The blue and white cabs, privately owned, offer air-con (‘cool cabs’) and better value, say some.  There are just as many black and yellow cabs that definitely do not offer air con and they obviously cost less. 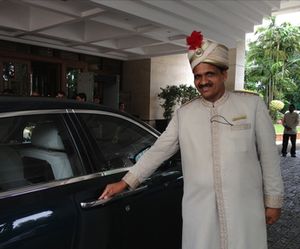 Car fir for a nonogenarian

Cars come and go the whole time, but the best car of all is the Captain’s personal Rolls-Royce. There is so much life in him.  He is talking about coming to Cannes for ILTM, and continuing on to London. He chatters about his long-time friend the Dalai Lama, who lives in this hotel when he is in Mumbai, and about the King and Queen of Bhutan, who have fallen in love with his Udaipur hotel, Leela Palace Udaipur.  He also seems to know more about luxury hotels worldwide even than your own correspondent…