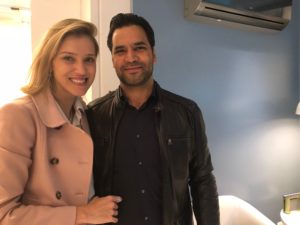 As soon as she arrived back at Emiliano São Paulo the gal was whisked off her feet by Gustavo Filgueiras, the charming owner of this really special hotel.  His wife, jewellery designer Andrea Colli, was hosting a presentation at her atelier, and it was a real treat to be there.  A model wore two of her earring designs, above, and it was explained that the current range is based on Ondina, a mythical mermaid who allegedly lives in the north of Brazil somewhere.  Andreacolli Gem’s salon, with workshop above, is next to her father’s popular Rufinos restaurant, and the garden which both conveniently share was, that night, hosting an oyster bar (there is much online discussion about which Brazilian oysters are best – some cite those from Florianopolis, State of Santa Catarina). 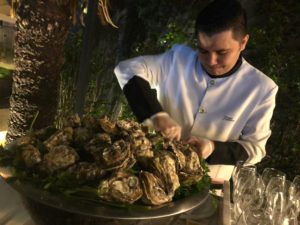 Brazil does seem to have the same plentiful supplies as, say, Australia (its Italian-produced burrata is absolutely outstanding).  Brazilian oysters are of the intense-nugget variety, and they certainly tasted good as an appetizer.  Then we rushed – if you can ‘rush’ anywhere in São Paulo traffic – back to the Emiliano.  When Gustavo Filgueiras’ father opened it in 2001 it was a phenomenon.  Existing hotels in town were of the big-and-traditional type, and Emiliano, named for the eldest Filgueiras son, instead offered only 57 rooms, minimum size 49 square metres, and at a price twice as high as anywhere else in town. Very quickly it attracted a following, and soon new-style competitors began to appear. 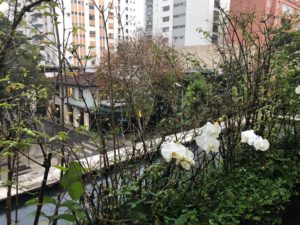 View from the gym terrace

Emiliano, a Leading Hotel from the start, is by Brazilian designer Arthur de Mattos Casas. Bedrooms have sliding Japanese-style screens, and soft wood walls, with some tan on the furniture. The ground floor is double height, with two full-wall living walls. Some of the chairs are haphazard collections of metallic knots, designed by the Campana brothers – the hotel bought 14, ten of which are still there (the others are in the Filgueiras home, next door).  Gustavo Filgueiras had never intended to join the Emiliano business.  After an architectural degree followed by business management and other courses, variously in Brazil, Italy, UK and USA, he was more consultant at first, but he joined full-time in 2005 and is now taking the whole company forward. This is a hotel that regulars absolutely adore: every room, it seems, is like a VIP special, offering a welcome bottle of wine, and complimentary massages and pressing. The gym is 24 hours and an orchid-studded hedge around its terrace allows the fresh air that today’s health addicts crave. 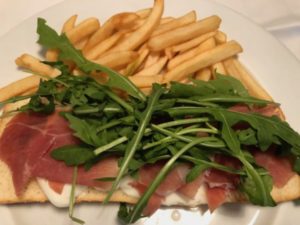 And the food is just right.  In years past they toyed with molecular (gosh, I had forgotten about that culinary craze). Now, with a great and jovial Italian chef, they are able to make the most of that burrata, and months-cured ham and more. I really liked the tasty Emiliano sandwich, perfect for eating at my desk, and at dinner, a veal milanese showed Milan-born chef Andrea Montella’s sense of humour.  Instead of the usual breaded veal slab with tomatoes and rocket, here I got four standing towers, each about three centimetres high, 2.5cm across, of perfect veal lightly wrapped in bread.  In the morning I was tempted by the wellness breakfast, which seemed to have everything from yoghurt, skimmed of course, through to fruits, juices, cheeses and eggs. This is indeed a remarkably generous hotel, and remains as timely and stylish as ever (I even managed the complicated FrancisFrancis coffee maker after just one lesson).  Now I look forward to the younger Emiliano, in Rio de Janeiro. SEE VIDEOS OF  SUITE 901 AND THE HOTEL’S GROUND FLOOR