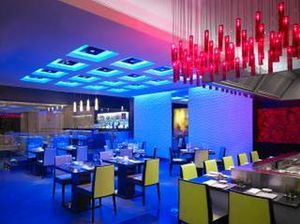 It seems that Japanese cuisine is fast on the heels of Italian to be the top popular food style in luxury hotels.  Go to any hotel that has a great sushi bar – Mandarin Oriental Tokyo springs to immediate mind – and you know it will do well.  Here in Delhi, one of the gal’s favourites is Wasabi by Masaharu Morimoto in the lower level of The Taj Mahal Hotel, New Delhi.  The restaurant is fairly intimate, with a mere 54 seats – designer is Theo Nicolaou, half of a talented-twin duo that works as Mario and Theo. 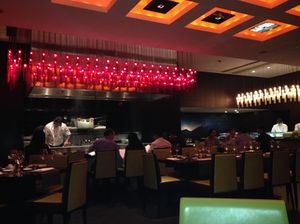 Wasabi is five years old this year and great celebrations are planned.  Will Morimoto-san himself come?  He is a busy guy – his latest restaurant, the Asian-fusion Bisutoro in New York’s Tribeca, opened last October.  He runs restaurants, he produces beers, namely Black obi Soba Ale, Imperial Pilsner and Soba Ale, all produced by Rogue Ales in Newport OR, and he is well known on Iron Chef.  Whatever the celebrations will be for Wasabi, they will be good.  A few months ago the hotel similarly lauded Wasabi’s neighbour, Varq, also designed by Mario and Theo: Varq is Indian fusion, and one happy reviewer on Tripadvisor, Jac-Hoby – a friend of both Felix Bieger and Raymond Bickson – says ‘The food was just perfect and presented in an outstanding way. The biryani served in a jar was sublime’ (I concur with that). 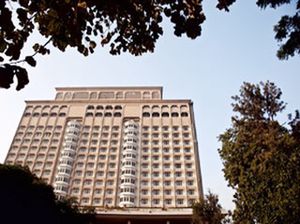 Taj Mahal Hotel New Delhi is an imposing hotel, a box that grows and grows upwards through 12 floors.  When it opened in 1978 it must have dominated the landscape. It still does, actually. Drive up to the first floor main entrance and almost 24/7 there is a buzz of people around the door, inside and out, and in the splendid lobby. This is where, recessed up into the single-height roof, there are six giant dome-shapes, each about ten feet across, formed of intricatedly patterned painted tiles.  There are similar, flat, panels on the right wall as you go into the lobby, where Delhi’s intelligentsia and literati meet and greet, some of them going on up to the hotel’s private club. 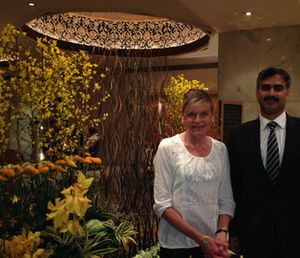 Not surprisingly Satyajeet Krishnan, GM of this lovely hotel, spends a lot of time in the lobby. He wanted to have his photo taken by the arrival flowers, which apparently are changed every two days. Good GMs do spend a lot of time in their lobbies so they can see what is going on.  When the much-missed late John Segreti was COO of Shangri-La, he had all his hotels’ gms put proper desks in their lobbies where they sat every evening, from five pm, to be available to guests.  When Peter French was GM of Mandarin Oriental Hong Kong the first time he spent much more time in his lobby than when he went back, for his second stint – by then there was much more paperwork required. 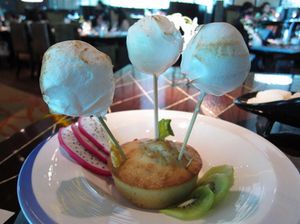 Satyajeet Krishnan had planned dinner in Wasabi but we were hijacked.  Raymond Bickson, who is in fact the CEO/MD of all the Taj brands, was hosting all his area people at another Taj hotel, the Taj Palace.  We therefore took a (Taj) Jaguar over to the Taj Palace, where Taljinder Singh, who runs Taj Palace, was to be in charge. We stood and drank and nibbled outside on Blue Ginger’s terrace, but it was getting cold.  Not only did at least two of his guests not ‘do’ finger-food dinners, but everyone wanted warmth, so Taljinder Singh brilliantly moved us in next door to his Blue Ginger restaurant.  We ate far too much lovely Vietnamese food, and talked a lot more. 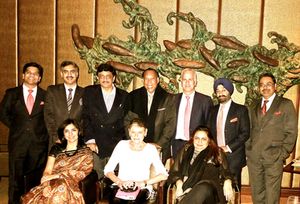 And here, if you want to see mug shots of some of India’s top luxury hotel managers, is a post-dinner line-up, with Taj big-boss, Raymond Bickson, immediately behind, centre, and, to his right in the photo, Trent Walsh, who runs the world’s top hotel mystery-shopping and assessment company, Leading Quality Assurance.  Yes, as the photo shows, everyone was having a very good time. And then Trent Walsh went to pack to fly to Guangzhou and the rest of us dispersed throughout Delhi.  Now what does tomorrow bring?