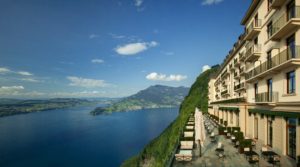 Look far down to the lake

Finally, it was time to return to Bürgenstock, Europe’s pre-eminent mountain-top resort that the gal had not visited since its renovation was just beginning, what seems like a lifetime ago. In fact the result is nine years’ work, and considerable investment by owners Katara Hospitality have resulted in this beauty, some 148 acres of Swiss countryside looking down to Lake Lucerne some 1,600 feet below. From the start, there had been a funicular to take people up and down, and this, built in 1888 and meticulously maintained, is still working: the most romantic way to arrive remains a 20-minute boat direct from Lucerne rail station to this edge of the lake, and then the funicular (the alternative arrival is via a modern road with enough hairpin bends for The Guinness Book of World Records). 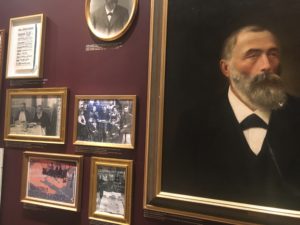 A wall of history

I arrived by car, and was immediately impressed by the fact that the only prominent advertizing is for Longines and Swatch – it turns out that the hotel has a strong partnership with Swatch Group as the late Nicky Hayek used the ‘old’ hotel for global management meetings. Yes, as a whole wall of historical photos and other data shows, there were always buildings on this site. I stayed in the signature Bürgenstock Hotel (above), a new-build with 102 rooms and suites all facing down to the lake: this replaces the Park Hotel that was here. A few metres away, with interior connection, is The Palace Hotel, the more business-like sibling that is simply a renovation of an existing 1903 building. Want to stay in the charming 12-room Swiss chalet Taverne? Here, bedrooms replace the offices that were previously above the home of raclette, rösti and veal Zurichoise. Coming in a few weeks’ time is the Matteo Thun-designed Waldhotel, another new-build, with 160 rooms and wellness that will attract health-seekers from around the globe. 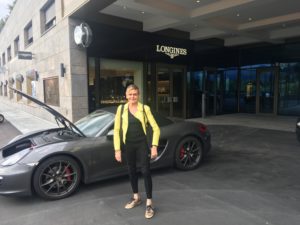 Outside The Bürgenstock Hotel

Even though the first parts of this gigantic complex only opened August 28th, 2017 the Swiss have already been flocking here, in droves. At weekends, says Robert Herr, the GM who oversees the whole, his teams can easily be feeding over a thousand a day. Eventually there will be 13 eating and drinking venues, headlined by RitzCoffier, a traditional fine-dining restaurant named in homage to Ritz and Escoffier, who both at one time worked down in Lucerne, at The National Hotel. Food throughout Bürgenstock Resort is in the hands of F&B Director Lukas Zehnder and Culinary Director Mike Wehrle, both of whom came from Peninsula – Wehrle was there personally to greet me on arrival and I loved the edible gift in my suite, cheese shavings and baby vegetables (he is a great believer in local is best). 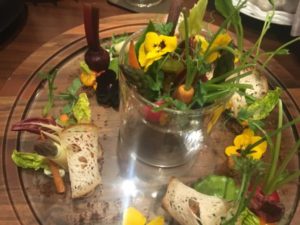 Bürgenstock Hotel’s corner suite 1111 was very tactile; every bit of American walnut, be it floor boards or door surrounds, was smooth as silk, and the tweeds covering big sofas and chairs were soft as could be (designer throughout is Maria Vafiadis of MKV, who does most of the work for Katara’s Swiss division). I had a log-look fire, and, of course, stunning views – funnily enough even when it rained it was lovely looking out as raindrops temporarily attached themselves to the big windows that wrap around two walls of the living room. But, I have to admit, this is such an extensive resort that it is possible that guests will not spend as much time in their rooms as they would in a city establishment. Here, they are constantly tempted to go out to see and try the myriad of offerings that this luxury resort has and, of course, there is eating and drinking…  NOW SEE A VIDEO OF SUITE 1111