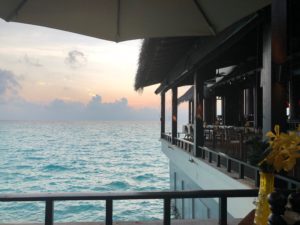 Looking out, across the water

Finally, on this Maldives peregrination, the gal stopped off at the celebs’ favourite, One&Only Reethi Rah. Honestly, though, if there were significant names around they were either hiding or wearing wigs as it was impossible to name anyone. Many guests, who include a staggering minimum 43% repeats (up to 58% that particular night), undoubtedly just spend an unusual amount of time in their villas. Interestingly, all 130 units, both those overwater as well as siblings on the beach, were designed by Jean-Michel Gathy. The overall shell, therefore, is the same as at Cheval Blanc Randheli Island, but here the open cathedral ceilings are supported internally by diagonally-set bamboo staves, set alternately as pairs or singles. 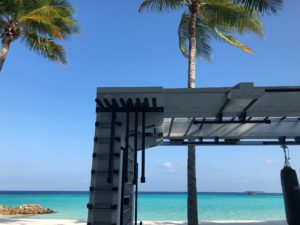 Outside the gym, a climbing frame

The 109 acres of this island, formed to a large extent by 1.5 million tonnes of sand to increase the area and raise the overall level by 20 inches, gives masses of space. There are 12 separate beaches, offering a total four miles of coastline. The land has a chef’s garden, where you can eat, and mature planting includes 10,000 adult palms, plus an orchid centre. The wellness complex is huge, with a central yoga garden surrounded by wooden treatment rooms with such enticing names as ‘bliss’ (I had a superb Java massage, and really enjoyed the busy gym, which has an outdoor climbing frame). Nothing is too much trouble here. Acting GM Jerome Coulson, from Brussels, and onsite Resort Manager Leon Pink, who hosted Monkey 47 sundowners on Fanditha beach, said no problem, the gym will open an hour early tomorrow, at six. And then I had a memorable off-duty dinner with the next GM, who arrives here in April to add his usual magic to an already superb product. 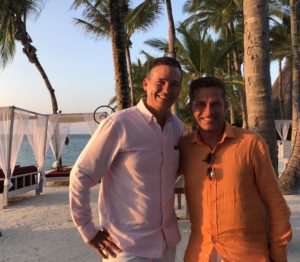 Fortunately I did get up early enough to make my way through what they call ‘the jungle’, as there, at 6.01 a.m., was an alert Miss Ukraine waiting to do gym supervision. In daylight, I cycled, on one of my two cream city bikes (see the photo above). Some of the sandy roads here are indeed super-highways, though you have to be alert as occasionally guests are driving their own buggies, same colour as the bikes. Everything is brilliantly colour-coordinated at this resort. At breakfast, overlooking the water, the yellow menu – offering healthy extras to supplement the enormous buffet – exactly matched the Royal Bone China coffee mugs and the yellow orchid on the table. And, of course, my omelette. As the menu says, “breakfast that is worth waking up for, offering 100% sunshine, 100% love”, and next time I might be brave, and try a signature Omelette Sol, egg whites with herbs, asparagus, green beans, spring onions and spicy tomato sambal, or even a Maldivian omelette, which includes a yellow-fin tuna sambal. 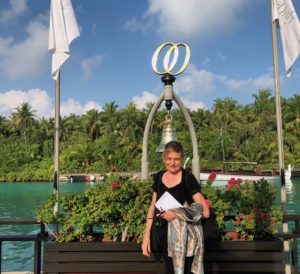 Farewell to The Maldives

Of course being a true luxury resort the airport shuttle boat here is lined with taupe leather. I shared it with a party returning home to Moscow. The enchanting kids, both under five, had Gucci sandals. Granny, her long plait wound into a bun, carried a paper bag but the three younger women each had seriously limited-edition designer bags, all LVMH. One was a Jeff Koons doing Mona Lisa for Louis Vuitton, which I had seen in print but, in real life, it really is gorgeous. I left this luxury resort feeling that at least I had recognized one celebrity, on a handbag (‘A HANDBAG’, to use the immortal quote from Oscar Wilde’s The Importance of Being Earnest). NOW SEE VILLA 132, AND THE SUNSET