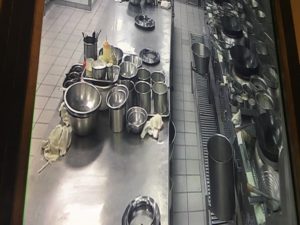 There is nothing like leaving town with a metaphorical bang and, for the last night in Shanghai, what is more memorable than a stay in The Peninsula Shanghai, that eternal luxury hotel that seems to be a leading fixture of the city although it is a mere seven and a half years old? Knowing GM Joseph Chong and his team, of course, they are already planning their first-decade party. (The six-person task force for what has become their annual ILTM Asia exposure, with three parties, one for international media, one for top local clients and one for east-China media, starts think-tanking half a year ahead.) The top creators seem to be Chong, and his cohorts Rieko Kibe and Cecilia Lui. Tonight, her last night, was to be a surprise for the gal. Meet at 6.45, in the lobby. Be led to the private four-person dining room of the Chinese restaurant, Yi Long Court, looking through to the kitchen, its real-time workings also magnified on a screen in the room, as above. 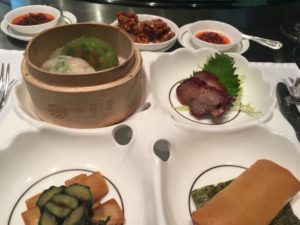 The feast started with what could be called a local bento box but since this is Peninsula, and Yi Long Court has two Michelin stars, it is of course exquisite, on a china plate. I have, clockwise from top left, a prawn and a vegetarian dimsum, two slices of barbecued pork, a prawn spring roll, and pickles. In quick, but not lightning, order come different tastes, wok-fried cubes of beef in black bean sauce, with baby greens; two crispest-skin tastes of chicken breast; lotus soup; noodles, and heavenly mango sago with a mango-filled crispy ball. We taste The Peninsula’s own wines, in order The Peninsula Shanghai Meursault du Chateau 2010, The Peninsula Shanghai Les Pagodes de Cos Saint-Estèphe 2011, and The Peninsula Shanghai Les Nonpareils Saumur Champigny 2009. 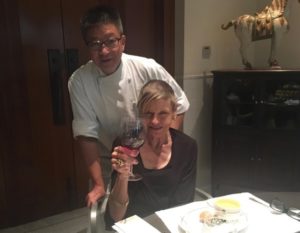 Chef Tang Chi Keung came to talk before the meal, and he seemed to create the menu then and there, on the spot – he came out later, to see how it had all gone. The evening was an action-packed delight. I heard about the new wines added to the hotel’s own-label collection, and about how 237 bottles of its bespoke Macallan are now on their way from Scotland, to be launched ceremonially end of the year. Perhaps one of the launch functions will be at No 1 Waitanyuan, the gorgeous early-20th century building next to the hotel that is now managed by The Peninsula. Once the British Consulate, No 1 Waitanyuan has 12 meticulously-restored function rooms, and acres of gorgeous gardens, ideal for weddings and other special events. 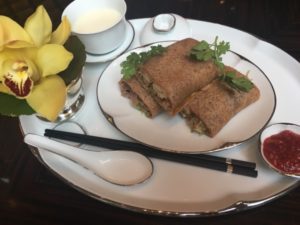 And then I went up to my own special-event, staying for the first time in suite 906 – see the video below. I looked down left at the No 1 Waitanyuan gardens, and straight ahead at the 1908-vintage Wai Bai Du (Garden) Bridge that connects the main Bund with North Bund. What makes rooms at this luxury hotel special? Rounded corners, plush carpets, full office kits, sockets just where you want them, easy-work lighting and a hundred more minutiae all add up… and among the books is a tome on Botero, a reminder that two Botero originals are supposed to drop in soon, permanently. In the morning, as it was getting light, I was in the gym, which naturally had an alert attendant waiting, and, at breakfast in the cool-avocado lobby, I ordered a Shanghai crèpe, filled with organic egg and duck and served with spicy chili sauce, and soya milk. Ten minutes later, of course a bellman waited outside my room, ready for baggage, and of course someone was there to see me off, and of course the car, in The Peninsula Green, was ready to purr away. It was 0801, one minute behind schedule. AND NOW SEE THE VIDEO