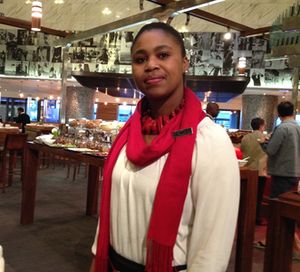 The gal really wishes that luxury hotels, as industry standard, put their breakfast servers into attractive attire, garments they like wearing as well as looking good. It is particularly important first thing in the day to have something nice to look at (and one cannot, sadly, count on other breakfasting guests presenting a Vogue-like vision across the room). There are some other great breaking-fast attires that are naturally and nationally right, say saris in India and mahout-cut trousers in Thailand. This server at Sandton Sun, Johannesburg, knows she looks chic. 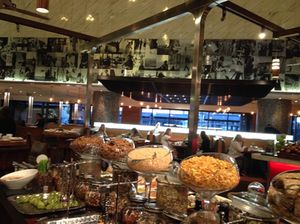 .. notice collage of employees, high on the walls

Breakfast, on the sixth floor Sañ at this 334-room hotel is a remarkably clever operation. You sit at tables of different heights – I chose a high-up table for six, while others preferred the normal height, or fixed-banquette tables. Loved being near the juice bar, watching the unusual concoctions some ordered. Loved looking up, at the massive frieze that runs all around this open-atrium that soars from here to the 20th floor roof. Just as the frieze at Girandole in Park Hyatt Tokyo is Vera Mercer black and white European café scenes, so this is a collage, on metal, of photos of some of the 700 employees who run this, and the conjoined InterContinental. 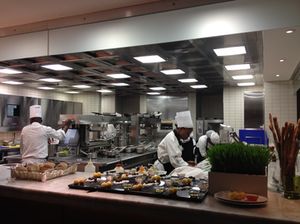 Look through to the kitchen

It is extraordinary how long some people take to choose from the buffet – I guess this is the difference between a business person, namely rush-rush, and a holiday-maker, namely slow-slow and where did I see that chocolate muffin? There is still room on my plate so let me go back for it. One man wanders around, unable to make his mind up, and then asks his woman what she thinks he wants. There is an open kitchen, so you can see your eggs being prepared. Those working in it are immaculate, unlike the American female Iron Chef, Alex someone or other, I was watching on the television in the really excellent 24/7 gym (she had filthy and badly-bitten finger nails and wore bracelets unsuitable for kitchen use). 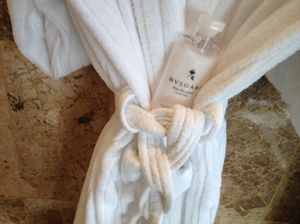 I ran into the British Airways crew, who stay here, and they looked remarkably fit after their A-380 flight. Some of them might well use the gym, and the hotel’s fabulous Africology and Pevonia spa, and the shopping mall attached to the hotel is being considerably upgraded. For me? Time to gym but not to spa, this visit. I wondered how long it had taken for my room maid carefully to twist the cord of my robe, as shown – last night, at turndown, another robe had been carefully laid out, its belt coiled as if a Bath bun. Since yesterday was Friday, absolutely THE night to be out by the Bordeaux burners on the hotel’s sixth floor deck-with-music, how many noticed such a detail as the belt coil? 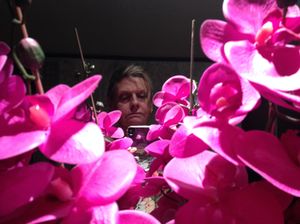 Orchids by the elevators

We had dined in Sañ, enjoying everything from the teacup-sized butternut squash amuse on, and toasting mutual friends in the Graaff-owned De Grendel Shiraz. And now it is time to leave Johannesburg. I note another detail, lots of colourful orchids by the elevators, and head down to the ground level, for the complimentary shuttle, all of five minutes, to Sandton’s Gautrain stop. As I found last time, this is the ideal way to get back to the airport, if you are near the stop. Once again I had forgotten to buy my ticket ahead of time but today there was no wait. The train started, and 15 minutes later we were at the airport. 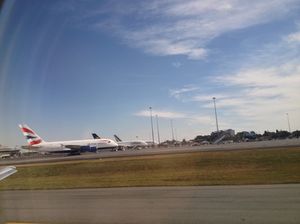 Three little girls parked side by side

As we taxied out to the runway we passed the British Airways plane, parked next to two other A-380s. Like national contestants in a flying Miss World contest, UK, Germany and France stand side by side, left to right. Who will win? I am obviously partial. Perhaps someone should instigate a Miss World contest for luxury hotels sometime? Sandton Sun can certainly get through to the finals of the breakfast section, and its servers.