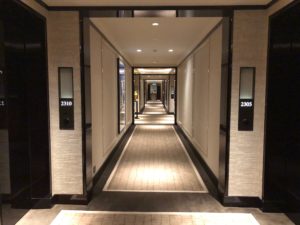 Thoughtful and beautiful are two adjectives that can be ascribed to the Grande Dame of Kowloon, The Peninsula Hong Kong, says the gal.  On the thoughtful side, bedroom controls are among the most consumer-friendly in the entire world of luxury hotels: digital wall panels, exactly where you want them and labelled in your language of choice, easily controlled lighting, temperature, drapes and more. Your desktop’s mole-coloured leather top exactly matches the notepad and stationery covers. Your sofa’s lacquered arms have pull out trays for your cocktail: there are, somewhat boldly, metal flower outlines on the wall behind you.  Come out of your room and, oh so rare, even the corridor is a thing of beauty. Whoever could imagine a 90-year old that is so modern an icon? 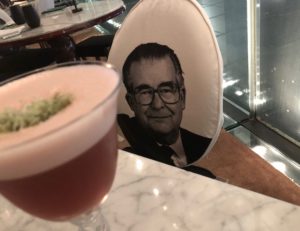 I was in 2307, the Peacock Suite, looking east, and south across the Harbour to Hong Kong Island.  It was tempting to while away the hours just gazing at that view but there were things to do – and this is a hotel that understands business needs, with superb connectivity, serious magazines and prompt delivery, via the brand’s signature cat-flap valet cupboards, of both the Financial Times and New York Times.  Hotel boss Joseph Chong was himself out of town, on business, and at dinner I had the great luck of joining Manager Masahisa Oba and Cecilia Lui, who commutes between Beijing, Shanghai and here, for a lesson in 21st century communications secrets as we dined at Felix. 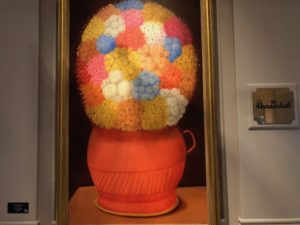 Oh what a lovely Philippe Starck-designed restaurant this 28th floor panorama is! The communal table at the far end is now a proper lively bar, and mixologist Marko Petrovic devised a special Kowloon Sour, of Plymouth Gin, Dubonnet Oolong Peninsula blend, beetroot-pepper cordial, lime juice and egg white  (the chair back in the photo is a likeness of Felix Bieger, after whom the restaurant is named).  Long-time culinary head here, Florian Trento, called by to introduce the new Felix chef, Juan Gómez, from Barcelona, and in honour of Joseph Chong, and the company in general, I drank a glass of 2015 Pinot Noir Peninsula Proprietor’s Blend La Cruz Vineyard,  Keller Estate Petaluma. Florian Trento certainly understands exactly what customers here want – at all eating places.  I loved my Verandah breakfast, currently reached by way of a Botero oil painting, Flowers, one of a dozen or so displayed throughout the hotel until the end of the year as a result of a collaboration with Botero Art. 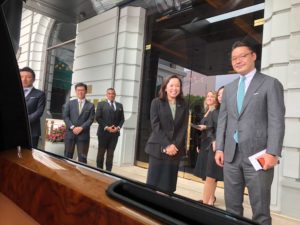 This particular Botero is in the style, the artist says, of Nicholas Poussin (‘painting is an expression of lines, colour and forms upon a flat surface made with the intention to produce pleasure’). There are several Boteros, paintings and small sculptures, in the famous lobby of this luxury hotel, which is a good thing as even as early as 1.30 p.m. I walked past a line of at least 30 standing patiently waiting for an afternoon tea space: every table was already occupied. Fortunately they have plenty to look at, people-watching and admiring the meticulous maintenance of the place, as they wait; sometimes there is live string music resonating from the mezzanine gallery in the north-west corner of the space.  On Saturday December 15th the lobby will see one, of so many, groups of VIPs walk through, on their way to a one-off dinner to celebrate not only the hotel’s 90th birthday but the 65th anniversary, too, of its Gaddi’s restaurant, named for one-time GM Leo Gaddi.  As I left The Peninsula Hong Kong, I noticed yet again how every flower in the lobby’s arrangements seemed almost too perfect to be true.  A whole posse of friends was there to wave me off: goodbye Hong Kong, for now.