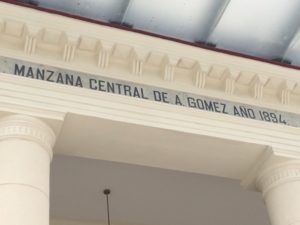 There is nothing like arriving at a luxury hotel in unique style, and here, above, the gal is, with Xavier Destribats, driven to what will be Cuba’s first true ultimate hotel. Gran Hotel Mazana Kempinski La Habana, right in the centre of town, receives its first lucky guests on June 1st, 2017, but here was a preview, and the entire management team, still without uniforms, was there as guard of honour. Why ‘Mazana’? As a note above the front door says, this was the site of Havana’s first shopping complex, opened by Senor Mazana in 1894.   Enter through the door, today, and you are immediately in a theatre of stunning champagne-coloured local marble, with pinky-grey fabrics and other accents. 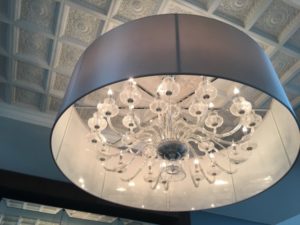 To beat Cuba’s famous, or infamous, humidity, Port Elizabeth-based designer Arno Joubert, who formerly worked with Jean-Michel Gathy, has only used carpets up in the sixth-floor rooftop ballroom. Every other space has marble floors, or wood-look ceramics. Extra-high ceilings everywhere also speak ‘space’, which means that some of the lampshades, like this five-foot beauty in the lobby, can be outrageously large. Up on the second floor are restaurants and bars, including a magnificent cigar lounge with six balconies looking over the central plaza or side streets. Xavier Destribats is cleverly getting the country’s six top cigar companies each to sponsor a balcony. 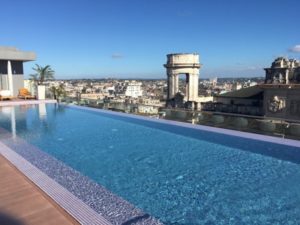 And then, built in a triangle around a garden-filled central courtyard, are 264 bedrooms and suites, nearly half with balconies. Rooms follow the champagne-taupe colour scheme. They have wet-area bathrooms, with clear-or-frosted windows from the bed area. Windows open, but have total soundproofing from street noise. Up on the rooftop, all with outstanding views, are the outdoor pool, an adjacent eight-room spa, good Technogym, and a – carpeted – ballroom, ideal for meetings and weddings. Oh this hotel will have so many unique features when it opens, like masses of universal sockets, and the city’s only in-room WiFi, and free (at all other hotels, you buy sim cards, to use routers in lobbies which then become gathering places for any outsiders who have also bought sim cards). 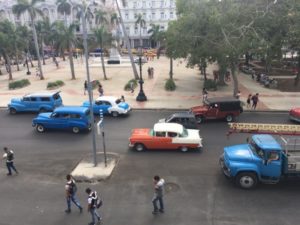 .. and, as always, the fascinating view of traffic

Another big plus is that this luxury hotel has a French GM who obviously knows his food, which in Cuba is quite important unless you are addicted to more starch and sugar than you get at home. But Xavier Destribats, who awaits the arrival of both a French and a Japanese chef, is going to change the perception of Cuban food (he knows that man cannot live on daiquiris and mojitos and cigars alone, but good bread helps and he will be importing proper flour for proper bread made by his German baker). More plusses, by the way. Here, you are flanked by the Bacardi building, the world’s largest Art Deco structure, the Museo Bellas Artes and one of Hemingway’s favourite bars, El Floridita. And in front is Parque Central, with, the other side, Gran Teatro de La Habana.