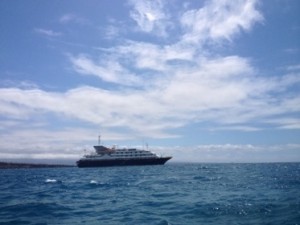 From Quito, the gal is going to cruise, and not on any old ship. No, this will be the hundred-passenger expedition ship and luxury hotel that is Silver Galapagos, pride of the Silversea fleet in this part of the world. First, a flight from Quito to Baltra, via Guayaquil, where more fellow passengers board, recognisable by silver baggage tags. At Baltra, 600 miles west of the Ecuadorean mainland, we land in a parched semi-desert, to have our pre-paid $100 Galapagos National Park tickets checked, and bags x-rayed for forbidden edibles. We are bussed in ancient vehicles all of ten minutes to the sea. Put on life jackets, get into zodiac inflatables and head towards this ship, the gal’s home for the next seven days – yes, SEVEN nights in one bed, no packing!

Our route in Galapagos

Everything, passengers and their baggage, food and other supplies,  is taken on and off by zodiac. Silver Galapagos never ties up at a dock. Some boardings and landings, as now from Baltra, are ‘dry’, climb straight on or off a zodiac from steps or a rocky shore. Others are ‘wet’, in or out of the water where the zodiac lands at a beach. Silver Galapagos does two week-long cruises, alternating among the 19 main islands of the Galapagos: six of this week’s complement were on last week, a few others will be staying on next week. We are going on a pre-set route, and it is, I know, serious business, with more than a few Jurassic Park animals, birds and fish to encounter, and the best of physical activity, and learning how it all started, with Fernandina and other volcanoes erupting, and, over the last four million years forming islands that gradually move further away from the hot spot of the Nazca plate where they were created (today they move about four inches a year). I also know we will be amply fed and watered. 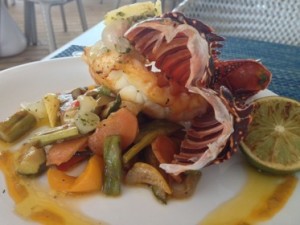 On which subject, having breakfasted at 4am Quito time, I am now, in Galapagos (an hour behind) ravenously hungry by 1.15pm. The routine starts immediately. Some will lunch in the second deck Restaurant, others head up to the fifth deck outside Grill, well worth battling with frequent winds as you sit on mushroom-coloured Dedon chairs. There is buffet ceviche and salads, and desserts, and choose your main, pasta, pizza or solid protein, from a hand-written slate. The Galapagos lobster becomes a great favourite, some eat it every time it is listed. Already people are sharing tables, getting to know each other, first names only. A physician, one of many, and his travel agent other half are travelling with a pair they met on an earlier cruise. Three Aussies are the stoics at the end of an all-continent, six week expedition that started with 20 participants. 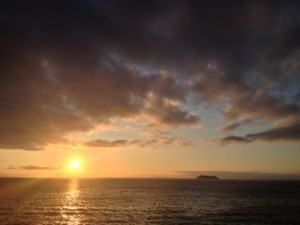 The first of what will be seven magnificent sunsets

The afternoon passes in a daze, with mandatory safety and lifeboat drill, and a reading of Galapagos National Park rules – no litter, no taking even the tiniest stone away, follow set marked tracks, obey tour leaders at all times and do not go within six feet of any wildlife (and no flash). Head guide Danny, Daniel Arteaga, introduces his team. Galapagos tourism brings in $418 million a year, of which $63 million, known as the ‘marmalade pot flow’, enters the local economy, supporting a total population of just over 25,000 (only three percent of the total land is inhabited). We sail away at 5.30pm, and tonight’s sunset, the first of seven, is the equal of any in the world of luxury hotels.