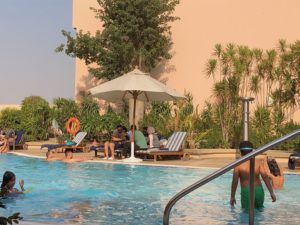 The pool is a big hit with families

What will the gal remember about this trip to Cairo?  The stunning night-after-night sunsets, promptly at about 5.45 p.m, are a daily happening that never palls – above, is the view over the official residence of the Saudi Ambassador in Zamalek, seen from suite 1900 of one of the city’s most-loved hotels, Conrad Cairo.  Then there is the warmth of the people, and the exuberance of the kids, in ever-multiplying numbers. Those shown here, in the Conrad’s pool, are probably Saudi, actually (or perhaps Kuwaiti).  Around the year, 60% of all guests are from the Gulf, attracted by the friendliness of the hotel and by its location.  GCC travellers love being by the water, especially when, in the case of the Nile, there are literally dozens of multi-storey pleasure boats moored permanently to the banks.  The boats spring to life, at least metaphorically, at sundown and activity goes on way after dawn. 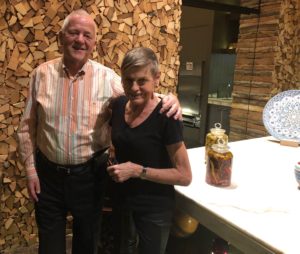 Middle Eastern food, especially Levantine, seems to be on the rise. When Wolfgang Maier arrived in Spring 2016 as GM of this 527-room hotel there was a recently-decorated steakhouse. But currency and supply fluctuations made it impossible to sell perfect ribeyes every night so he switched it, OAK Grill, to modern-Lebanese.  Consultant is Joe Barza, a one-time bodyguard who decided the rigours of a kitchen stove were less life-threatening than trying to protect life and property during Lebanon’s civil war: he now has his own company, and since 2017 has worked with Hilton throughout GCC and the Middle East.  OAK’s food can be described as fresh, and traditional with a modern touch. 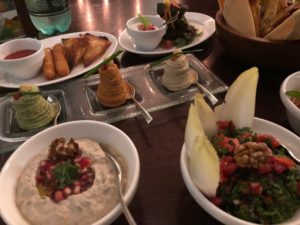 See, for instance, three variants of hommus among the mezze that started dinner in OAK Grill (I then went on to kebabs of Mediterranean prawn, and fresh salmon, with herbs that came from the hotel’s own herb garden). We drank Cape Bay, but a special numbered edition of Merlot matured in Scottish oak. Wolfgang Maier is justly proud of what he is doing, giving foreigners a taste of Cairo: I noticed up in the 22nd floor Club lounge that many Middle East dishes, like babakhannouj, hommus, tabbouleh and tahini, are ideally suited for club-lounge food as they make easy-to-eat dips.  This particular lounge is really popular as it has plenty of outdoor terrace seating, for those sunset views, and, as always, some guests make dinner out of the snacks on offer. 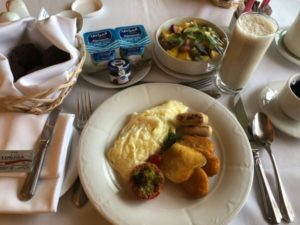 What else makes Cairo so memorable? Does it have any negatives?  Other places rival Cairo’s traffic and, often, swept-clean sidewalks right next to piles of garbage.  What is, fortunately, rare elsewhere is that even the city’s many outstanding luxury hotels cannot stop guests brazenly smoking, on room corridors and in all public places, and in bedrooms.  Another put-off, those who must have daily breakfast eggs have a shock when they see yolks that are delicate palest yellow (if Egypt wants to increase its visitors from Japan, who are used to egg yolks the vivid colour of nasturtiums, they, too, need to start feeding their hens on, say, seaweed or something wholesome).  And so I left town.  I had ordered Conrad Cairo’s set ‘health breakfast’.  As you can see I had a banana smoothie and an egg-white omelette, but these people’s generous hospitality meant potatoes and so they came too, and I had no fewer than four chocolate brownies.  The Mercedes drove away, along Corniche El Nil – it was 6.32 a.m. and the party on the open-air top of the newest pleasure boat, a hundred yards north of the hotel, was still in full swing.  At the crowded airport, two immaculately-uniformed hotel minders were ready to see me through check-in and emigration.  They are just one reason why knowledgeable travellers choose such a popular hotel. SEE MY SUITE, AND THEN THE VIEW FROM THE CLUB LOUNGE