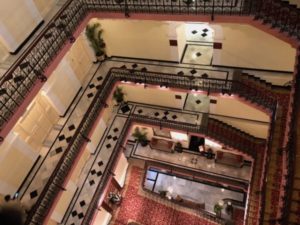 Looking down the Palace stairwell

And so, a swansong night in the Indian sub-continent at one of its most famous luxury hotels, Taj Mahal Palace. Reading Sybaritic Single’s commen two days ago, about always being put in the same room, brings back so many memories. This time the gal stayed in 553, the Ravi Shankar Suite. There are elevators of course, but if you climb the famous square stairwell, it is up 157 stairs (you go past the bust of the founder of the Tata empire, Jamsetji Nusserwanji Tata, 1839-1904).Inside the total-1,400 sq ft suite, there is more exercise as you go up, via 27 shiny marble stairs with glass sides and stainless rails, through a couple of mezzanine levels, to what would be the sixth floor if it had doors and a corridor. There are two bedrooms, at least two bathrooms, walk-in closets and several sitting areas. Where did Ravi Shankar sit when he wrote his 1970 Concerto No 1 here, using the sitar now displayed near photos of the maestro with George Harrison? 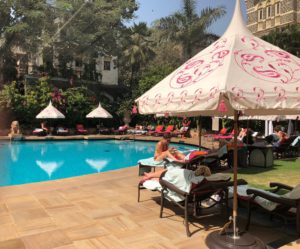 The view, down to the Gate of India, provided nonstop interest. Taljinder Singh, GM of both Taj Mahal Palace and its adjacent Taj Mahal Tower, is determined to have the Gate designated a UNESCO heritage site and, to that end, the hotel has installed stylish permanent railings around the pedestrian area, which is cleaned daily – Taljinder Singh is also keen to get his hotels, especially Taj Mahal Palace, recognized as the best in the world. He benchmarks constantly with Mandarin Oriental Bangkok, and other properties in Asia (service is so much better in this part of the world, he says, though he does admire Plaza-Athenée in Paris). As part of his effort to get recognition from consumers as well as the trade, he has beautified the pool area, with stylish embroidered umbrellas and, almost unseen, a net that encloses the whole garden, thus keeping out the determined crows that are such a blight to Indian luxury properties. 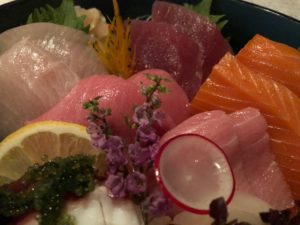 The hotel has a copious selection of eating options. I love Souk, on the top floor of the 20-storey Tower – great views and the Lebanese starter buffet is really good. I was blown away by Shamiana’s weekend brunch buffet – see a video of it being set up, below. Taljinder Singh hosted a farewell dinner, before I left for the airport, at Wasabi by Morimoto, where after a sashimi platter with oh toro I went on to black miso cod with, new to me, mushroom-truffle kamameshi, ‘kettle rice’, brought in a sturdy nanbu iron pot. Stay in one of the suites or a Taj Club room here, by the way, and you barely have time, or room, for any of the restaurants. These rooms come with complimentary breakfast buffet in Sea Lounge – get there early, after its 7 a.m. opening, to get one of the tables for two by the windows, looking down at the Gate. You also have complimentary high tea, and cocktails, and a butler. 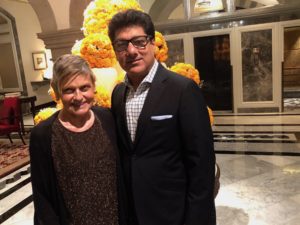 An impressive line up of regulars, about 35% in all, stay at this luxury hotel. I hear of one American couple, living in Rome, who, unlike Sybaritic Single. return to the same room every year for their three-week stay. They book that room two days ahead of arrival so it can be fumigated and the aircon turned off, and a copious library of books, Fedexed ahead, can be arranged on shelves. Apparently they spend mornings in their room, afternoons by the pool, and they dine in any restaurant that has areas that are non-aircon. The Aquarius barbeque that I had by the pool with recently-arrived group CEO Puneet Chhatwal would therefore suit them just fine – by the way I am so pleased we photographed the boss in front of the marigolds as a few hours later they had all been replaced by deep red blooms. NOW SEE FIRST THE RAVI SHANKAR SUITE AND THEN THE SETTING UP OF SHAMIANA’S WEEKEND LUNCH BUFFET