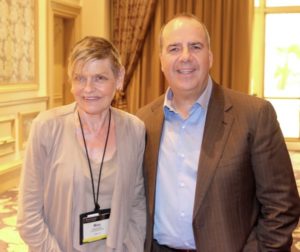 It is the blend of hard work and serious business with parties, invariably concurrent, that makes Virtuoso Travel Week so essential for all those involved in luxury hotels, cruises, safari companies, ships and river boats, private jets and so on.  Another element that makes it work is that, thanks to Matthew Upchurch, and his family, and his extended family, also known as his team, the whole mega-event still seems amazingly personal.  As always, the hotels that send along their GMs as well as sales staff are the most likely to benefit – one GM had a definite Middle East booking for $450,000, rooms alone, just because of interaction with the relevant travel advisor.  That is the business side. Now think of the networking at parties. 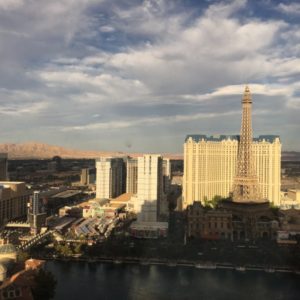 Look across to Paris

Evening parties start long before sunset. The regular circuit, year after year, includes early cocktails hosted by Belmond, and another party, which always has really good food, thrown by InterContinental, getting ready to open its Ljubljana hotel. Corinthia London joins with the Halekulani, Honolulu, and the Jefferson, Washington DC, to host a more intimate cocktail – this year Ireland’s K Club joined in, in an elegant party in a Bellagio suite looking across The Strip to Paris. Accor’s poolside breakfast is always popular (they give a choice of dishes). Mandarin Oriental hosted dinner for 70 cooked by Pierre Gagnaire, who had given up part of his oh-so-sacred France August holiday to fly to Vegas. ILTM had its usual casual outdoor relaxer, this year themed for Latin America, the new name for its next annual Mayakoba event, September 25-28, 2017. 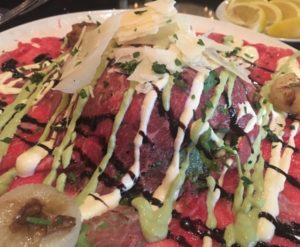 The list of planned events goes on and on, and the level of their entertaining seems ever higher. Peninsula’s regular pool-side party was this year themed for The Peninsula Hong Kong, with stunning food stalls (top Brazilian advisor Teresa Perez told me, as she rushed out to yet another function, not to miss the Pekin duck). There were also, thanks to the imagination of the hotel’s GM Rainy Chan, old-fashioned Hong Kong games of the calibre of trying to throw sweets through holes in a vertical board. SEE THE PENINSULA VIDEO, STARRING SHANGHAI GM JOSEPH CHONG, BELOW. At the same time, too, there were the usual important gatherings of just meeting, as planned or not, in the casual Café Palio deli, with its shaded outside terrace, and, for more refinement, breakfast was best in Café Bellagio, with waiter service and a good line in omelettes that ranged from healthy-spa through to every additive you could think of, and waffles, with what-ever. At lunch, some hotel groups booked the same table for lunch every day at Bellagio’s Olives (Conrad and Waldorf Astoria – OH the Olives’ carpaccio!) or Lago (Swire’s House Collective) restaurants, with no-choice menus to save time, and back to speed-dates. 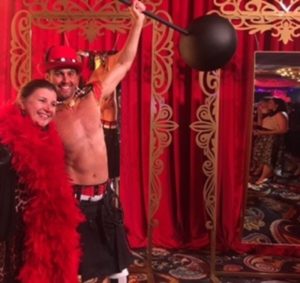 Welcome to Best of the Best

My final night back at this luxury mega-hotel was Wednesday’s Best of the Best gala, of particular interest to hoteliers. Cocktails were sponsored by Marriott’s luxury brands (the company then took 16 tables), and the Le Calvez family’s Ch Clarisse St-Emilion 2013 supplemented the wines at the two top tables. This evening was circus-themed, with Albert Herrera appearing on a rotating wheel, though by the time of the awards it was serious business, hold the fun. Winners included Best hotelier of the year Susanne Hatje, New York Mandarin Oriental (photo above), and Best ambassador was Kees Hogetoorn, Sofitel Grand Amsterdam. Luca Virgilio was of course there to collect Best restaurant, for the newly re-opened The Eden Rome, and Christian Boyen, the same, for the Hemingway Bar at Ritz Paris. And then, sadly, I had to leave, for the next place (but, already, I cannot wait for Virtuoso 2018)… NOW SEE THE VIDEO