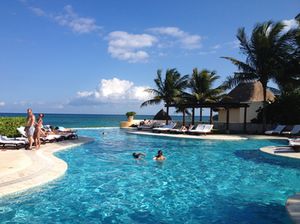 One of the Fairmont Mayakoba pools

Final thoughts from ILTM Americas, gathering place of any luxury hotel worth its salt.  This year, the second annual event, many who were here last year deliberately arrived early so they could enjoy the facilities of whichever luxury hotel they were staying in. Down at one of Fairmont Mayakoba’s many public pools – some of the villas also have private pools – at the public pool down by the beach, the gal ran into friends from San Francisco recovering after The America’s Cup. Next year, she plans on being in town, or rather in this idyllic spot, even earlier herself. 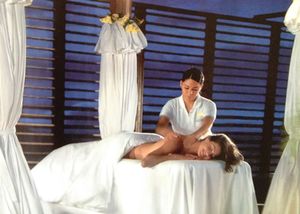 In 2014, too, I might have time to visit the hotel’s Willowstream Spa. It is rather frustrating, actually, not to have time to use the spa – I do not use ‘spa’ as a verb, ‘to spa’ to me is utterly affected.  But never mind, it is good always to have something to look forward to. 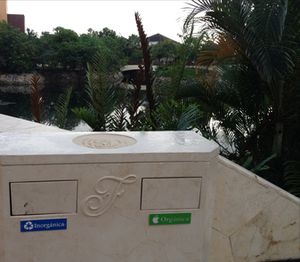 This year, by the way, the hotel has put in really attractive recycling bins around the property.  Before you arrive, they invite you to Pack for a Purpose, bring along items to be donated to the less fortunate (and of course, you can always leave other things behind). This Fairmont has also switched all bedroom lighting and televisions to LED, saving 90 kilos of carbon dioxide emission a day. One more thing: why not sponsor one of the coral reefs that the hotel is restocking? 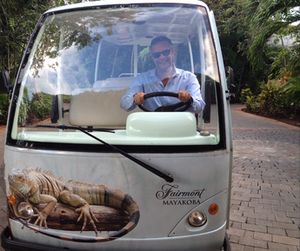 Simon Mayle at the ready

I of course zoomed around the resort on my BMW bike, but others were elegantly chauffeured, in buggies decorated with some of the animals you see on-campus.  On more than one occasion I had to swerve to miss iguana up to 18 inches in length.  I passed a massive snake, and on my last day a raccoon bustled away.  Perhaps that intrepid explorer Simon Mayle, seen here at the wheel, has the right idea in moving around this luxury resort in style.