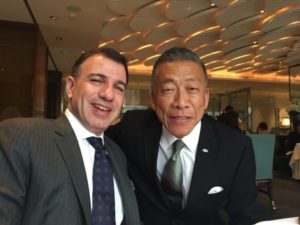 The GM of Mandarin Oriental Hong Kong, Tony Costa, will be dancing out of the door when he moves on to his next role in life. Right up to his last day he retains the effervescent exuberance for which he is known far and wide. Look, he says to the gal, have you seen my rum barber? With his assistant, Jean Philippe Moser, he rushed up to the luxury hotel’s inhouse barber’s shop where, day long, the great and the good of Hong Kong go to be lathered and – Angel Gonzalez Mandarin – shaved, and trimmed and possibly dyed. There is indeed a bar there – see Jean Philippe Moser posed, above. Everyone smiles around Mr C – he wanted to be photographed, for instance, with one of the hotel’s longest-serving colleagues, Danny Li, 44 years on the job and still going strong. 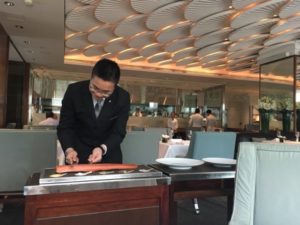 We were lunching in the Michelin-starred Mandarin Grill + Bar, where chef Patrick Leono, who comes from Calgary, manages to pair creative dishes with such all-time staples as plain-and-simple smoked salmon, brilliantly carved table side and of course instead of automatically portioning the appropriate garnishes they ask you, the consumer, what you would like. The breads, by the way, smelled so good it required great discipline not to eat the whole lot, especially the sourdough. This hotel has traditionally attracted locals, including those great-and-goods, and this continues: every table at the soft, white, Conrad-designed Grill was taken, and, somewhat frustratingly, the acoustics are so good you cannot hear a word of what anyone at the other tables is saying. 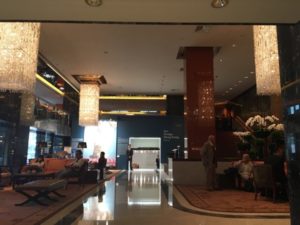 Looking along the lobby lounge, as it is now

Tony Costa leaves this luxury hotel on June 12th, 2017, and around the same time Jean Philippe Moser leaves, to become GM of Mandarin Oriental Marrakech. Mandarin Oriental Hong Kong will continue to be in safe hands, guided by such a long-tenure staff team but also under incoming GM, that Frenchman with flair, Pierre Barthès, As I left, I looked at the lobby, now with a Phillips pop-up auction house at the far end. The whole lobby is being redesigned by André Fu – what will it look like at my next visit?