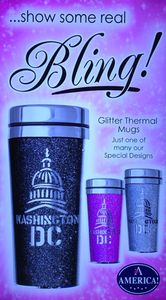 Las Vegas is bling, and so is Atlantic City and so too are various other parts of the U.S.A., but this mug seems to be completely wrong.

There is nothing that the gal finds bling about Washington D.C.  Even the most potentially bling luxury hotel in town, W Washington, a transformation of the old-old Washington Hotel just to the east of the White House, is tastefully done.  The original reception area, with a bank-like barricade of vertical metal poles, looks, well, stylish, as do strings of pearls hanging down from black lampshades in the hotel’s main lobby. Funnily enough, W Washington is literally back-to-back, or side-by-side, to one of the city’s signature luxury hotels, the Willard InterContinental, which holds it annual Kentucky Derby party on Saturday May 4th, 2013. 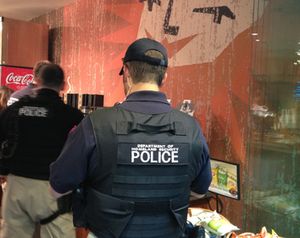 Washington D.C. is essentially serious.  There is obvious security everywhere, even in a coffee bar at Union Station. Undoubtedly a thousand times more security is not obvious, but who cares?  Honestly, it is just like security gates at airports.  Those who worry about having their body revealed evidently have something to worry about, namely a superfluity of calories. As a result of all this security, the visitor to Washington feels really safe, daytime and in the main city centre. 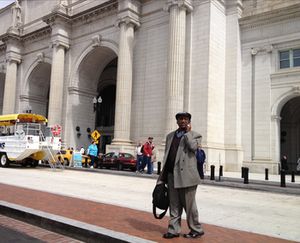 In front of Union Station

Union Station is a masterpiece, by the way.  In 1901 the U.S. Senate Park Commission invited architect Daniel Burnham to orchestrate a City Beautiful plan for the city, part of which involved transferring the rail lines from the Mall to a new terminal. The 600-foot length of the station frontage is awe-inspiring.  It has classical columns, and lots of life going on, in front and inside the concourse. Here you see a man waiting, perhaps for a pick-up vehicle?  Here too is an amphibious duck, waiting for tourists who want to explore this beautiful city by land, and by water. 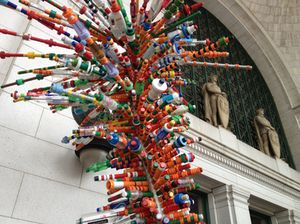 There is always so much going on. Take art, seen to perfection at the National Gallery of Art, the National Portrait Gallery, the Phillips Collection and the Arthur M Sackler Gallery. The Newseum, an interactive museum of news and journalism get top ratings, as does The International Spy Museum. 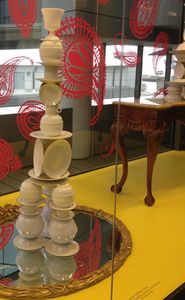 There is also pop-up culture, if you can call it that. In the concourse of Union Station right now is Plastic Storm, a 14-foot high assembly of discarded plastic bottles and caps by George Sabra. On the way out of the U.S.A. on this trip, I took the excellent Amtrak service from Washington’s Union Station to Philadelphia 30th Street station – under two hours, and electric sockets by every seat (there is also WiFi onboard).  At Philadelphia 30th Street catch the twice-hourly, 15-minute SEPTA train to the airport, cost one dollar a person.  There, in the main terminal, past security (which was thorough and friendly), there was another sculpture, this time of white china piled high on antiques.  What was ‘artist’ Laura Dombrowiak’s message, I wonder? 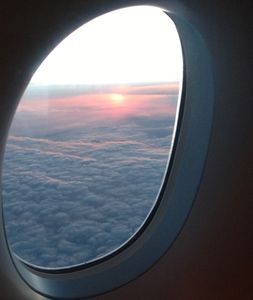 And the sun comes up above another country

And so I flew away from the great U.S.A., for now at least.  The sun came up on another day, over another continent… watch this space.