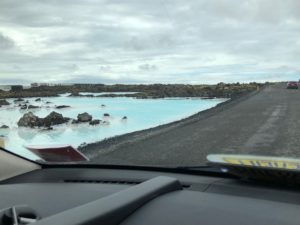 No-one plans a first-time visit to Iceland without including the Blue Lagoon on the itinerary, even though a trip there now costs €54.  It is simply one of those world bucket-list things that you can cross off, having done it. Eiffel Tower, Taj Mahal. Blue Lagoon. Although the Blue Lagoon already had an adjacent Silica Hotel (rooms from €435 a night), now it also, since April 2018, has the luxury Retreat at Blue Lagoon Iceland hotel, rooms from €1,132 a night.  As the gal’s outstanding driver, Jón Halldórsson, approached the Grindavík site, even the water in ditches at the side of the road showed yes, this is blue lagoon territory. 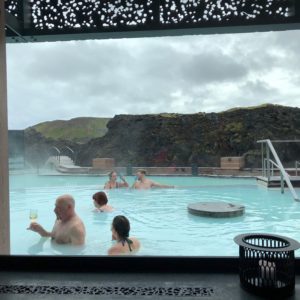 View from the Spa restaurant

It was Dr Grímur Sæmundsen, business tycoon and CEO of Blue Lagoon Iceland, who thought of adding The Retreat. He called on the Icelandic company Basalt Architects to come up with a highly modern, and angular, exterior of what would be a 62-room hotel.  I went into a lobby that was more a gallery for viewing an exhibition of Iceland: the soaring space has windows that look out to lagoon pools and moss-covered lava surroundings, and interior displays include Icelandic glass sculptures, in dark colours, from the 1980s. I continued down enormously wide dark grey stone steps to the lower level Spa Restaurant – and looked through a whole wall of windows at a panorama of spa-goers (some without tattoos) revelling in the warm sulphurous water. 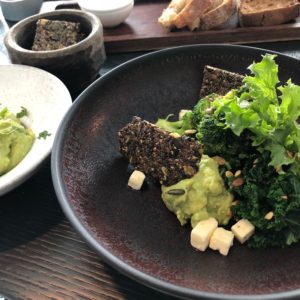 Broccoli-kale salad, a side of avocado

Lunch was an absolute delight. The restaurant is a casual space with absolutely lovely servers, all female.  I had a spinach smoothie, with apple, ginger and mango, followed by a broccoli and kale salad with peppered crispbreads and a side of avocado – home-made breads were all sourdough, including potato. These were served on plates that were bespoke Rene Ozorio or Villeroy & Boch.  I really liked the look of a quick-seared fresh cod dish, flanked by cherry tomatoes, and the sushi platter of the day was enticing as well. Most of the guests around me were in white robes and flipflops, obviously taking a break from their spa treatments. 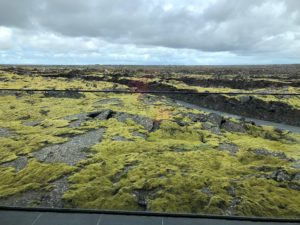 Some bedrooms look straight out to moss-covered lava rock

There was just time, then, to see a couple of rooms, called suites although the ones I saw were definitely one-room bedrooms. Doors are opened by ordinary proximity pad or access wristwatch. Inside, all-glass end walls look out either at lagoon pools or at the green moss that covers Iceland’s lava terrain (is it true elves live under that moss?). One of the rooms’ all-wood walls has closets that open to reveal the free alcohol-free minibar, and an Illy coffee machine, with Villeroy & Boch cups. One nice touch, that I wish more unforgettable hotels would adapt, is that behind the bedhead is a long desk, at standing height, with no seating provided – but a B&O Beoplay M5 Wireless 360 personal assistant is ready for you. Bathrooms have Ecocycle toiletries, from Denmark (an egg-shaped tub is in the main room).