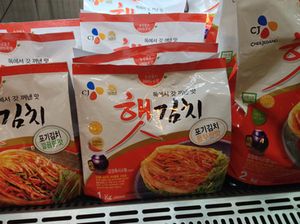 Only the intrepid eat everything local, like hawker food in Lombok or Petaling Jaya – or kimchi here in Seoul. Luxury hotels do serve kimchi in moderation – Conrad Seoul’s lovely top-floor 37 Grill & Bar offers kimchi foam with pan-roasted sea scallops.  Kimchi, also known as gimchi or kimchee, is basically rancid cabbage soaked in brine and blended with spices, and Koreans eat about 77 pounds a year (each). There are over 200 types, but here are five: the standard Baechu-kimchi, Kkakdugi-kimchi, with radish; Chonggak-kimchi of whole baby radishes with their greens; Nabak-kimchi of rectangles of radish and green onion floating in brine, and Oisobagi, cucumber kimchi. Want to learn more? See Visit Seoul’s excellent Seoul Book of Everything. 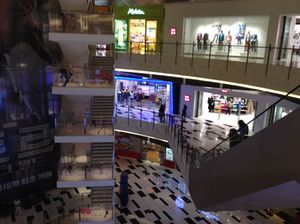 Looking down into the IFC mall

Seeing the kimchi packs in the three-floor underground shopping mall beneath Seoul’s IFC and the Conrad reminds me of a tale told by the hotel GM Nils-Arne Schroeder.  His parents returned to Hamburg with a kimchi pack, and put it in their fridge. Three months later they were awaken middle of the night by an explosion.  They searched everywhere, could not find anything, went back to bed.  In the morning they opened the fridge to get something and were knocked over by the overwhelming smell and the devastation the exploded pack had caused.  Every single stored item had to be burned. Back to the shopping mall. Look how splendid it is. It is managed by Taubman, the US mall specialist headquartered in Bloomfield Hills MI and expanding fast in Asia (and yes this is the same Alfred Taubman who once Chairman of Sotheby’s). 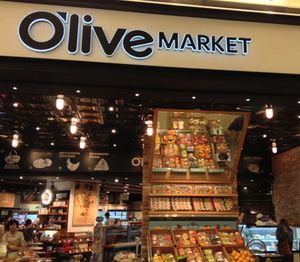 Down in this particular mall there are fashion stores from A to Z, as in Zara, with a gigantic Uniqlo. A Smoothie King corner reminds one, as if one needed to know, that Steve Kuhnau ‘made’ Smoothie King in 1973. There are nine cinemas, all managed by self-purchase kiosks in the natural brick wall outside, though a concierge is there to help.  A sign opposite says ‘life is like a box of choc popcorn’ and conveniently, there is a big popcorn stand, and a big book stand in case you want to read through the movie.  You will more likely, however, be networking via one of your social media favourites, say Cyworld, Facebook, KakaoTalk or Twitter (KakaoTalk, launched only in 2010, is used for over four BILLION messages every day). 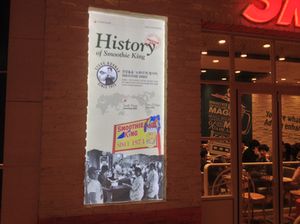 But social media is not completely replacing the written word. I look at the Korea Joongang Daily, wrapped in the sadly renamed and debased International New York Times which was, until a week ago, the truly-international and erudite International Herald Tribune.  The Korean Joongang Daily has a photo of President Park Geun-hye inspecting a guard of honour.  At the bottom of the page is an advertisement with the headline ‘Dr Park’s Psychiatric Clinic for Foreigners’.  This is not the same Park – half the country seems to be called Lee or Park or Kim, and fortunately this Park, Jin Seng Park MD, also has a photo portrayed.  He is billed as author of ‘the best-selling Lovers, Marry after you have Fought’. 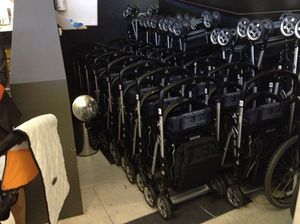 Perhaps then, when they have fought enough, they start preparing for one of those Korean weddings that I mentioned the other day.  And soon, along they way, there will be babies, and they can bring them here to this mall, which, guess what, has a large number of buggies for free use.  I watch someone carefully cleaning a returned buggy.  In nearby food courts, finished diners clear their own trays, leaving the table surface spotless.  At one sushi counter I watch a man behind the counter, wearing a hat and gloves, and a clear plastic guard that hygienically covers his mouth and chin. 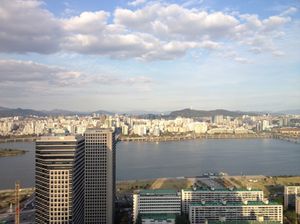 I go back up to my fabulous spacious room at the luxury Conrad Seoul hotel, just above this mall. I can look across the Han River to Namsan Mountain. Some other rooms look down to the long narrow park immediately to the west of the building, Yeouido Park.  This was the site of Seoul’s first aerodrome over 60 years ago.  Looking ahead, I make a note that Incheon, where the current airport is, some 60 km away from Seoul centre, hosts the next Asian Games, September 19 to October 4th, 2014. And at that juncture the Porsche Rimowa and I get into a waiting Jaguar and head for Incheon, the airport of course, the three-runway wonder that is going to add four more runways.  Where next, Girlahead?