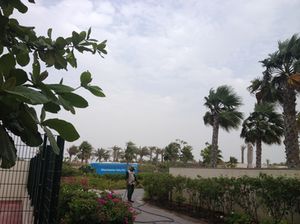 Manchester City, or rather its football club, is owned by Abu Dhabi, or rather Sheikh Mansour (Sheikh Mansour bin Zayed al Nahyan, deputy Prime Minister of the UAE and half brother of its President, HM Khalifa bin Zayed al Nahyan). On May 11th, 2014, Manchester City beat West Ham to win the UK’s Premier League title. The team was in town, presumably to collect congratulatory Swatches or the like from the Sheikh. They of course had a wide choice of luxury hotels in which to stay, but their manager picked Park Hyatt Abu Dhabi, a pretty nice place, says the gal, for the players and their physios and their personal chef to camp for a few nights. The bus parked behind the tennis courts revealed their presence. 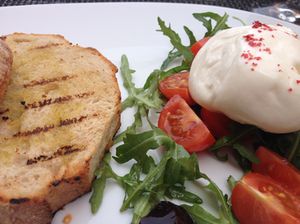 What a day that last day in the Emirate was, for me. I lunched off local bur rata, made in Sharjah, with Holger Schroth at Emirates Palace, the Kempinski that makes all other Kempinskis seem just a bit modest. After lunching outside in the sun, we looked at the much-vaunted gold-bar ATM. Somewhat naively I thought you bought a heavy gold bar, but in fact it a more delicate operation. A window reveals an array of necklace pendants or charm bracelet bits, all stamped with the Emirates Palace logo, some available in silver, some in 22ct gold. Prices are adjusted by real-time metal prices. Put your credit card in, punch the number for your chosen piece and out it pops, with a receipt. 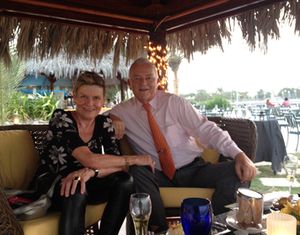 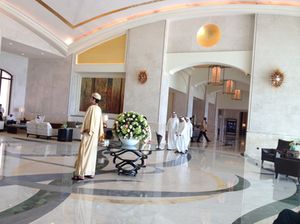 Lots of stories are being told here by local lads. They love to congregate in such venues as St Regis Saadiyat Island (at lunch there, the guys in white sit in groups, with the occasional woman in black, floor length and head covered, coming in with a gold-headed letter for one of them to sign). They are completely unperturbed by holiday-makers, many of them Germans and Russians, who sadly pair too little clothing with too much flesh. What do such tourists do all day long? Collapse like air balloons that have lost their gas, whiling the hours away by the pools. 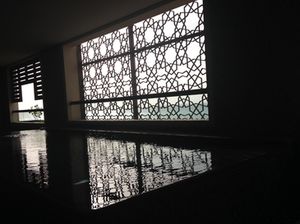 So far there are only two hotels on Saadiyat Island, one of the Emirate’s two St Regises, and Park Hyatt Abu Dhabi, where the Manchester City team is staying. I am having half a night in 646, which has a 30-foot pool, indoor in that you are protected from the elements but outdoor in that a breeze can come in through the balcony fretwork. As I swim I think of other grand upstairs suites with pools. I swam in pouring rain in Grand Hyatt Tokyo’s Presidential Suite pool outdoors on the 21st floor, with a Zen garden inside. I swam, truly inside, in the lap pool that all 38 villas at Wolgan Valley, in Australia’s Blue Mountains, have. I did not swim in the too-small plunge pool of my terrace at the then-Aman Delhi but across town I swam again and again in the 20-foot cantilevered pool stuck on to the side of The Oberoi Gurgaon’s sixth floor Presidential Suite. 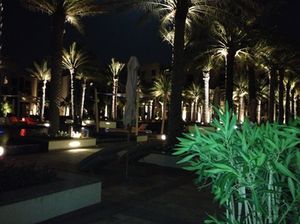 Just as a good swim after a flight is a fabulous restorative, so a good swim before a flight is a great way to go. Tonight, after dinner in Park Hyatt Abu Dhabi’s Beach House – Manchester City had gone out for late night training – I went to bed for 90 minutes, was woken by a soft-voiced telephone operator, said goodbye to this luxury hotel and was on my way, for the cramped last-century experience that is Abu Dhabi International Airport, and a two a.m. flight that is already tomorrow.