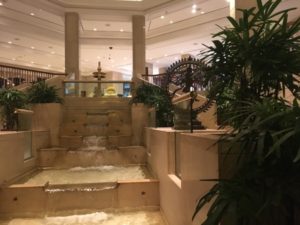 Park of the lobby

The Leela Mumbai is an institution – it was more or less built in the gardens of the two-floor ‘bungalow’ in which the much-loved, and much-missed, Captain Nair lived with his wife, Madame Leela. In 1985 they built a hotel, and thus started the entire portfolio of The Leela. The gal knows all their luxury hotels, and, like all of the brand in India, they feel like family.   The Leela Mumbai has the big advantage of being only ten minutes’ drive to the airport (stay in South Bombay and you might have to allow two hours in case there is traffic). The hotel also has a magnificent garden – with 67 gardeners. 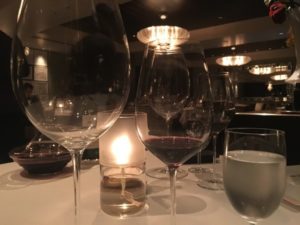 Under GM Sameer Sud, this hotel is elevating its game. It has got rid of a somewhat tacky selection of souvenir shops that used to line the lower level, which made walking to the gym or the spa uncomfortable as you were petitioned by all the traders as you went. Now all those stores are white-windowed, so much more stylish. The spa, by the way, is well worth a visit: three of the therapists are Bhutanese and they and ESPA get along just fine. Admittedly, there will soon be more stores moving into this lower level arcade but I am assured they will be definitely upmarket, highlighting Leela experiences, and fashion heritage. 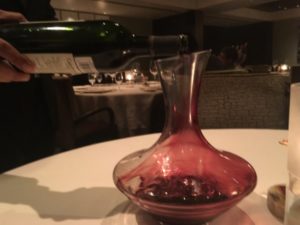 The wine was deftly poured into a carafe

What a joy it was, my last supper in India, to return to Le Cirque. This restaurant, on the eighth floor along from Royal Lounge, is now definitely gaining in popularity – there were foreign business types, dining alone, as well as multi-groups of Indians in the 30-ish age range. I hope they had as good an evening as I did, especially since we had entertainment and education from a sommelier. I commented on the lovely glasses, 400-size, from Zwiesel, and mentioned an 800 Riedel I had inadvertently bought from Harrods once (it had to be changed, later, for a 400, but now, at home, we have 200s, which are much more practical). Aha, said the sommelier, and produced one of the dozen 800s that this restaurant actually has. 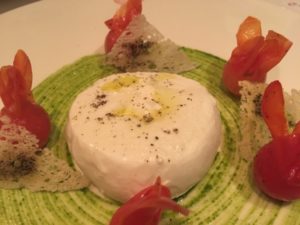 Another burrata from Bangalore

How much wine does an 800 hold? He filled an empty wine bottle with water and showed that an 800 holds 2.5 bottles (750ml size) easily, but then it was time to offer our Cakebread Cellars 2012 Cabernet Sauvignon Napa Valley, which went marvellously with burrata from Bangalore and the rest of the meal. Then there was just time to go along to pack, in lovely Konarak Suite, named for the 13th century Konarak Sun Temple in Orissa, now a UNESCO World Heritage Site. And then, sadly, my car was waiting and I, and the trusty Porsche Rimowa wheelie, said goodbye to this luxury hotel and went to the sparkling new International Terminal, to leave India. As a final memory, see the video of the garden, below.