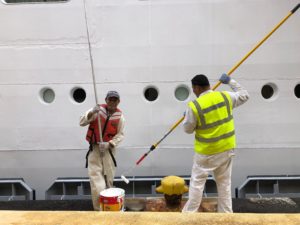 The gal’s favourite time on any ship could well be early morning, having deck space to herself. Where is everyone else? RSSC Navigator holds 490 passengers but only rarely is anyone else out there, walking the 11th floor metal jogging circuit unless the determined young female security officer has deemed the swell too dangerous, in which case it has to be walking the wooden tenth floor deck, around the pool. Sometime during the night this has all been cleaned, and whenever the ship is in port teams of painters start work covering up the black marks that invariably occur when the pristine white ship docks up against old tyres protecting a pier. 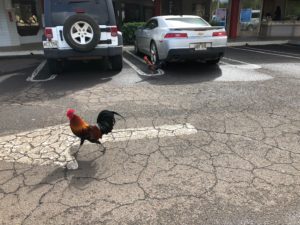 It was the day to visit another of Hawaii’s islands, Kaua’I, 33 by 25 miles in all with 90 miles of coast. The population of 68,000, humans that is, easily balanced by the thousands of feral cockerels and hens who range at liberty over the entire island. The males crow quite agreeaby, but I do wonder what happens to all their ladies’ eggs. Are they eaten by predators or do human locals get food for free? I had been disturbed, by the way, to hear from a Honolulu-born driver on Oahu how he and his wife both work two jobs to be able to raise a family of five – they rent a two-bedroom apartment where they live with five kids plus, soon, a grandchild. 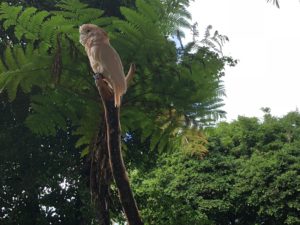 Here on Kaua’I the driver was a 40-year immigrant from mainland USA who has variously here been sailor, beachboy and fisherman employed by the Kaua’I Royal Family (now that pineapple farming on former crown land is no more, he is worried that developers will cover it with condominiums, as in Waikiki). He took me to the most significant resort on the south-east coast, Marriott Kaua’I Beach Resort, a few miles from the island’s capital, Lihu’e. As a change from those thousands of chickens, here I was greeted by a single salmon-crested Moluccan cockatoo, proudly dominating one of the world’s biggest hotel water gardens – see the video below. 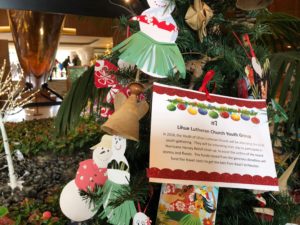 One of Marriott’s trees

This is indeed a spacious resort: it only has 357 rooms but it is spread out, with ten minutes’ walk from porte cochère drop off, down escalator, past water garden and through to the open-sided lobby. Here are, currently, a display of Christmas trees all decorated by local charities and organisations: vote for your favourite and the overall winner will get a donation. Apparently this family-luxury resort, with a years-old big photo of a somewhat-younger J.W. Bill Marriott and his father, started life as the Kaua’I Surf and then became Westin. Today it is partly Marriott Vacation Club and it is, overall, family-club, with beaches, big pools and tennis, and foods to go (bananas at $2) as well as substantial $39 buffets. On Sundays, you can choose chicken, presumably not Kaua’I feral but huli huli, grilled with a dipping sauce that includes brown sugar and onions. NOW SEE A VIDEO OF THE HOTEL’S MASSIVE WATER GARDEN